Sunday afternoons often find us relaxing with good beer and food at a favorite local restaurant. Even when we're traveling, we just might be doing the same. During a recent stay in Blacksburg, Colleen and I found ourselves with some free time so we headed over to Bull & Bones Brewhaus and Grill. We had visited Bull & Bones just once before, and I looked forward to getting back. There was a wait for a table, so we took seats at the bar, where we had immediate service.

We were informed that three of the house beers were not available. That was disappointing, but may have been related to equipment issues — the beers were being poured via jockey boxes and not the permanent wall taps. Fortunately, The Lunch Pale Ale was available to fill my glass. Colleen ordered a pint of Maroon Effect Ale. 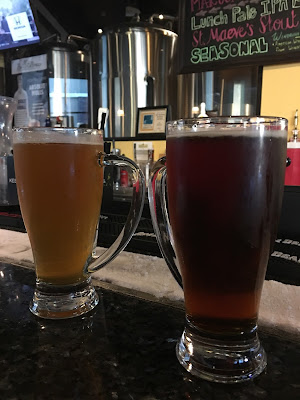 We opted to start out with an appetizer of Candied Bacon Lollipops, because, well, bacon. The hickory smoked bacon strips are flavored with maple syrup, brown sugar and cayenne, and served on skewers. They are amazingly delicious! After a big breakfast in the morning, and indeed a weekend of heavy meals, though we were hungry, none of the big meat entrees that Bull & Bones specializes in fit the bill. We decided to pull our “main courses” from the appetizer menu. A plate of nachos and a dozen wings suited us well. The restaurant offers dry rubbed flavors of wings in addition to the usual sauces. We opted for a Jamaican Jerk rub on half the platter, and spicy garlic sauce on the rest. Besides providing for neater eating, the dry rubbed wings were very delicious and something I’d definitely try again.

The Lunch Pale Ale is a crisp and hoppy Pale Ale. It has a pleasing floral aroma, and a juicy, citrus hop flavor. Dry hopping adds a bit of “green” freshness. There’s a hint of bitterness in the finish as well. My two pints paired well with all the spicy foods we were eating. Maroon Effect Ale is a brown ale with rich chocolate and caramel notes.

A lot of customers stopped by the bar while waiting for their table, and the waiting crowd never seemed to go away. The restaurant was definitely short staffed at the time. I suspect the holiday and the opening weekend for VA Tech football combined in a “perfect storm” for the restaurant. We enjoyed a couple hours of good food, beer and conversation before heading back to the hotel to relax. On a future trip perhaps I'll get to try out some of the other beers offered by Bull & Bones, and perhaps I'll save room for the house-smoked ribs too.