The first match of the season for the Rivanna IDPA group was the annual BUG (Back Up Gun) match. I headed over to Charlottesville on a foggy Saturday morning to shoot the match with the S&W Shield that I practiced a bit with last week.

The club's rules for this match allowed any BUG legal gun according to the 2015 IDPA rulebook. However the match was scored using the new 1 second per point down scoring method for 2017. This allowed folks who hadn't had opportunity to acquire new equipment, matching the latest restrictions, to shoot the annual local match. Since the latest edition of the rulebook was published just 15 days prior to the match it was a good compromise.

I can't claim that my recent practice session helped a whole lot, but the match was fun nonetheless. There were four stages, each with two, 5 shot limited strings, for 40 rounds total.

Stage 1 presented us with five targets, each with copious hard cover leaving very limited scoring areas. The loaded gun was placed on a barrel and at the start we dropped to kneeling behind the barrel and shot from cover. Each target required 1 hit. We then shot the same string a second time. 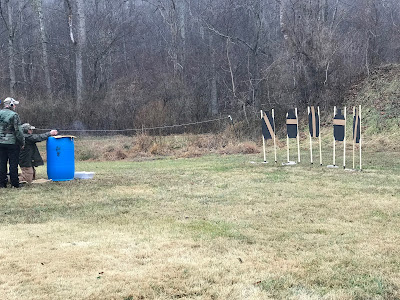 Stage 2, which was the first stage I shot, started with the gun at low ready, and while moving across the bay we were required to put one hit on each of five targets. The second string was shot moving in the opposite direction.

Stage 3 was a challenging stage with 5 head-shot only targets.We shot this course of fire seated, with the loaded gun starting on the table. As with the other stages, two strings were fired for score. 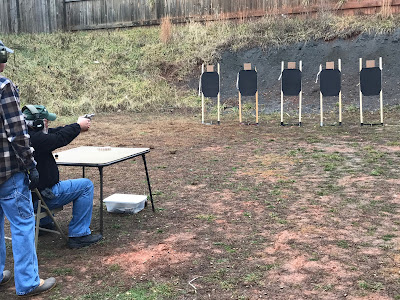 Stage 4 tested us with some strong-hand, weak-hand embarrassment exercises. Starting with the gun on a barrel, the course of fire required two shots on the each of the outer targets, and one head shot on the center target. For added challenge, there was a non-threat target placed below the head shot. The first string was shot strong hand only and the second string was support hand only. At least I didn't hit the non-threat. 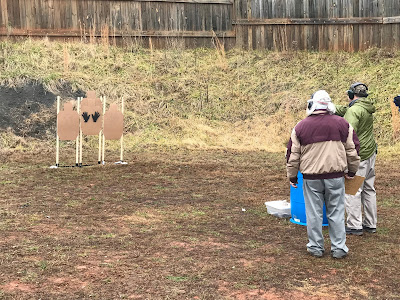 This was a fun, but quite challenging match. I shoot the S&W Shield infrequently, and the copious tight shots required exacting sight alignment and trigger control. I had more than a few misses, and with a penalty now of 5 seconds each, they add up fast. The head shots and ample hard cover made it difficult to know if the misses were close or wide, high or low, left or right, so I didn't get good feedback on what I was doing wrong. I'd like to shoot the small gun at a few more matches this year, but first more time at the practice range is in order I think.