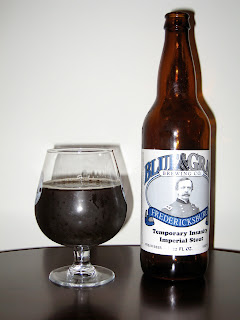 Temporary Insanity Imperial Stout is a seasonal offering from the Blue & Gray Brewing Company. This beer is named in honor of Major General Daniel E. Sickles, New York State Senator and Representative in Congress from 1857 to 1861. General Sickles shot and killed Francis Barton Key, the son of Francis Scott Key. The younger Key was having an affair with Sickles' wife. He became the first person in the U.S. to be found innocent by reason of insanity. General Sickles had quite an interesting life and is described as being "separated not only from family but from reality" in his later days. Read more about the man at the Arlington National Cemetery page.

Enough about the beer's namesake, let's move on to the beer itself. This Russian Imperial Stout pours with a thin cream-colored head which quickly dissipates. The aroma is a slightly smokey malt. The color is dark, but not black. Light shows through the brown edges. The flavor is bitter chocolate, with a bit of molasses. The hops are noticeable but not over-powering. The mouth feel is lighter than some beers in this style which makes for a very quaff-able drink. The alcohol is well masked. There's a light carbonation on the tongue. When we shared some with friends last night I was surprised how quickly the glasses emptied.

This is an Imperial Stout that is easy to drink and would be enjoyed by folks who aren't into "big" Imperial Stouts. Even for fans of the RIS style, this is an enjoyable beer. I also kept a couple bottles of last year's release in the refrigerator. The bottle I tried a few weeks ago was still quite tasty and very smooth. I've opened the last bottle I had in the house so I'll be going back to the brewery to pick more up. It's a beer to keep on hand this Winter.