What's up with this beer obsession? 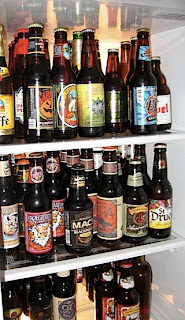 There was a discussion recently about "Beer drinking vs collecting" on the Bearadvocate.com forums. The thread refers to "beer tickers"; people who want to simply amass a large list of beers they've tried, even if it's just a small sample or taste. I don't consider myself a ticker, though I have started keeping a list of beers I've tried. (That's the geek in me coming out.) But it did get me thinking about my beer buying habits. Having tried over 150 new beers this year, I can honestly say I simply enjoy trying new beers. (And there are plenty of people who surpass that number easily.) I'm not ticking off brewery samples and the like. You can't really say you've tried a beer if you haven't had it in a full glass, looked at the color, savored the aroma, swirled it over your tongue .. well, now I'm getting thirsty.

Whenever I'm shopping for beer, I have no trouble finding new beers I just have to try. Usually it's a different beer in a favorite style, such as a DIPA or an imperial stout. Or perhaps it's a new brewery I've never tried, or even an untried style. Sometimes it's just an interesting label that will intrigue me to buy the beer. That's why I end up with so many beers in the fridge.

I rarely make a repeat purchase when I make a beer run, even if I thoroughly enjoyed the last purchase. Sure, there are a few things we like to keep on hand all the time, but I always find something new I want to try. In fact, about the only time I tend to buy full six-packs any more is if I'm taking beer somewhere or if I'm bringing something back from a trip that I can't get locally. I'll generally buy seasonal releases in full six packs, or more, if I've had them before and have been waiting for the new year's release. Sierra Nevada Celebration, Brooklyn Black Chocolate Stout, Tröegs Nugget Nectar are a few such favorites that come to mind. Of course, I always have something from Blue & Gray in stock. Otherwise, before I can finish the purchase off I'm back in another store being tempted by different beers. Even in Fredericksburg where the selection is limited, there's always something new to try. Most of the time my purchases are mixed six packs with 2 or 3 each of a new beer, or perhaps a bomber or two. Of course, some of this is to keep a large variety of beers on hand. I hate opening a refrigerator full of beer and being unable to find anything I feel like drinking at the moment. And it's happened.

Obsession? Compulsion? Probably a little of both. I'm fine with that. :-)

To paraphrase a current TV ad, "What's in your refrigerator?"