"Southern Beer Appreciation" is a phrase that could apply equally to both the appreciation of beers from Southern breweries, and to the appreciation of beer by folks living in the Southern United States. The Southern Beer Society is a recently formed online organization whose stated goal is "to help foster beer culture in the Southern United States by providing beer lovers throughout the region the information they need in order to become better informed about beer-related matters in the South." This new site went online in January 2008 and is still in the formative stages. The project is being spearheaded by three friends; Jeremy (beerbuddha), a beer consultant for a beer and wine shop in New Orleans, along with Vicky (LifeIsgood) and Ken (barefootbrewer), both of whom hail from Mississippi. Jeremy describes the vision behind the SBS:

We are seeing breweries, brewpubs and top quality beer stores starting up left and right. Speaking of beer stores; the number 1 and number 2 stores on Ratebeer's Best Beer Retailers 2008 were Knightly Spirits in Orlando and Bruisin' Ales in North Carolina. Our food is tops in the country so the beers we brew won't be that far behind. I'll be honest, as an organization and website we're still in search of our identity but we know what we want to do and that is educate Southern consumers about not only craft beer but craft beer brewed in their own backyard. We also want to be an informational tool for those looking for quality beers in the South, homebrew information and also legal information regarding beer laws in their states.

I may be a bit biased, but Southern food is tops in my book, so why not promote craft beer to go along? The main activities at the site currently are the discussion forums and news updates. There is also an extensive list of Southern breweries posted. The group plans to continue adding Southern craft beer-related resources.

Speaking of craft beer in the South, recent figures from the Brewers Association show that the Southeast region showed the largest growth in the nation in craft beer sales. As seen in the accompanying map, the Southern states in general showed significant market growth:

Mr. Wandel reports that the Southeast region of the U.S., comprised of Alabama, Florida, Georgia, Mississippi and South Carolina, was the fastest growing region for craft brewer sales, with nearly 32% growth over 2006. The Great Lakes, Mid-South and Plains regions also posted craft growth of over 20%. Another piece of news from the presentation is that seasonal beer sales have passed pale ales as the top-selling craft beer concept or style. 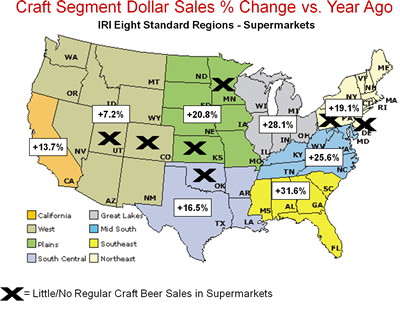 On that note, I've got some new (to me) beer from Terrapin Brewery in Athens, GA. I think I'll break that out tonight.