Dinner and a Beer at the Greek Festival 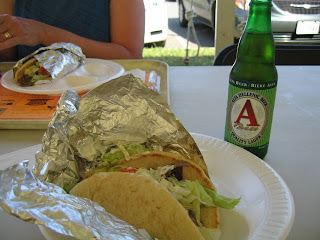 We made a stop for an early dinner Monday at the Greek Festival being held by the Nativity of the Theotokos Greek Orthodox Church. The church holds this three-day event over the Memorial Day holiday weekend each year and it's always a good time. Often we go back for a couple of meals over the weekend, but this year we made it just once. Colleen and I both opted to order Gyros.

I also ordered an Alfa Hellenic Lager from Athenian Brewery in Athens to accompany my meal. I admit I didn't have high expectations for this pale lager but after spending the afternoon in the sun, the cold beer was refreshing. When poured into a plastic cup the beer was pale yellow with a thin head. The aroma was grassy with a faint citrus note. The flavor was weak, though there was some hop bitterness in the finish. I wouldn't make extra effort to seek out the beer but it was not unpleasant. It was certainly better than so many pale American macro-lagers. Alfa checks in at 5% ABV. The accompanying Gryos, along with the Athenian Dancers providing entertainment, made for a pleasant finish to the afternoon.