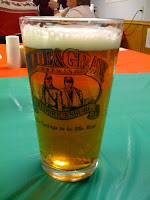 We had our annual members' Christmas dinner for a charitable organization this weekend. As often happens, my friend Frank and I were charged with arranging for the beer. Our local Blue & Gray Brewing Company is very generous in their support of the organization, so we frequently serve Blue & Gray beers at our functions. Many of the members are macro-lager drinkers, and Miller Lite and Corona make frequent appearances. However for this function we decided upon Blue & Gray Classic Lager.

A quarter keg of Classic Lager was ordered. Someone also purchased some Yuengling and Miller Lite just in case the macro-drinkers were steadfast in their choice. To help promote the Blue & Gray being served I brought along a stack of Blue and Gray pint glasses for use by the folks at our table, rather than the standard red solo cup. Many people made surprised comments like "You brought your own glass?" Instead of long explanations, I generally replied with a simple "yes", as if I find nothing noteworthy in that action.

Blue & Gray Classic Lager is a Munich Helles style lager. It's a crisp, clean beer that will appeal to many people. The beer pours a golden yellow with a moderate white head. The aroma is sweet malt with slight grainy hint. The flavor is malty with an ever so slight sweetness. The malt is well-balanced with a lingering hop bitterness. The meal served was a typical institutional-style ham and potato dinner. The flavor of the Classic Lager allowed the bland food flavor to come through, and the beer provided a needed flavorful contrast to the food. I believe the alcohol percentage of the Class Lager to be 5% or less, so it is easy to drink over a long evening with friends.

It's no secret that I lean towards strong flavors in beer, be it hops or roasted chocolate malts. A simple lager is not often my choice. It's been awhile since I've had the Classic Lager from Blue & Gray, and I enjoyed getting back to basics very much. While enjoying my beer, I was thinking about the suggestions often made when trying to tempt macro-beer drinkers with craft beer. So often those suggestions lean towards Belgian-style beers or other non-typical beer flavors. I can't help but wonder why that is so. The macro drinkers are already showing a preference to a moderately flavored lager. Why not tempt them with similar style beer? Offer another "yellow" beer, one with more flavor, but not one that shocks with a big change.

This tactic seems to have worked for our function. I did not notice anyone drinking the Yuengling and Miller that was held in reserve. In fact, by the end of the evening the keg had kicked. Many attendees did opt for wine and stronger spirits, so not everyone drank beer. Nonetheless, we had actually ordered more beer than we have in the past, and this was the first time I recall that we did not have beer left over at the end of the evening.

In our quest to try new, bigger and bolder beers, let us not forget that there are good craft "basic" beers waiting to be enjoyed as well.