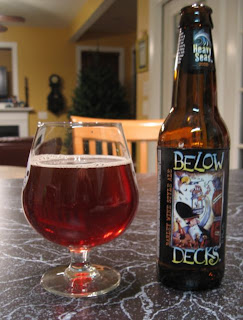 Clipper City Below Decks Barley Wine is part of the brewer's Heavy Seas series of "big" beers. Released each December, it's only on the shelves a short time. Clipper City's seasonals have limited availability in this area so I was glad to see the beer at Total Wine. I picked up a 4-pack during my last beer run and have been looking forward to cracking one open.

Below Decks pours a hazy copper-orange color. Even a hard pour produces a thin head that drops rapidly leaving a thin ring. The aroma is sweet malt and toffee with some dark cherry and plum fruits. When tasting, the sweetness of the malt hits first. There are also dark fruit and hints of vanilla. There's just enough of a bitter hop presence to add some balance, but still allow the sweet malt to remain dominant. Alcohol warmth is apparent and there's no ignoring that this is a 10% beer. The mouthfeel is creamy and slightly sticky. A lingering bitterness, and warmth, in the finish wraps it up.

The notes on the bottle suggest cellaring a few bottles to enjoy later. I do think aging would serve to mask the alcohol presence a bit and bring out the dark fruit and sweet malt aspects even further. The beer was enjoyable "fresh" but I do think that with a bit of time it will become even more enjoyable. However, I'm not promising I have the fortitude to ignore the remaining bottles long enough to test that.