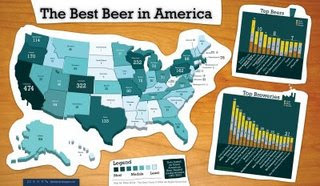 Rick Lyke, who writes the self-titled blog "Lyke to Drink" posted an interesting analysis of Great American Beer Festival winners in the period from 1987 - 2007. The states of California, Colorado, Wisconsin, Oregon and Pennsylvania come out on top with the most awarded beers. Virginia ranks in the upper middle with 48 accumulated medals. Not too shabby if you ask me. Regionally, Maryland checks in with 33, North Carolina at 18, and Washington, DC with 2.

Rick points out that the most awarded beer is Alaskan Smoked Porter, with 6 Gold, 4 Silver, and 5 Bronze medals in the 20 year period. Anheuser-Busch holds top honors for the most awarded brewery. However, what is likely of more interest to readers of this blog are the top craft brewers. They are Rock Bottom Brewery, Alaskan Brewing, and Pizza Port / Port Brewing, who take fourth, fifth, and sixth places respectively, for total number of medals earned.

See Rick's post GABF Medals: A Few States and Breweries Are Almost Sure Bets for more information and a larger, detailed map.

I missed this interesting article back in October when Rick posted it. I was directed to Rick's analysis by a reference on Twitter to a post on Strange Maps. Hat tip Chris O'Donnell.