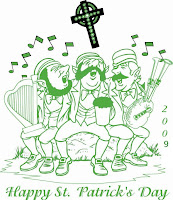 The 7th Annual St. Patrick's Day Parade and Festival was held at the Blue & Gray Brewery on Saturday. Despite the cool weather and threat of rain, the festivities were well-attended. Folks arrived early to enjoy Irish music, a corned beef, potato, and cabbage lunch, along with plenty of Blue & Gray beer. The rain started falling at about the same time the parade began, but that dampened the enthusiasm of neither the participants nor the spectators. Folks were having a good time despite the cool weather. Tables and chairs were set up under a heated tent so people could stay dry while enjoying their lunch.

Another batch of Minor Dementia Stout was ready in time for the celebration. While many folks enjoyed this limited, occasional release, I enjoyed an old favorite, the Blue & Gray Stonewall Stout. The stout was just the ticket to accompany the corned beef, and help ward off the chill.

As always, proceeds from this event go to charity. Many worthy organizations, such as Cub Scouts and Girl Scouts were on hand as well. This parade is very popular with the kids, and there are always many families in attendance. Hats off to the folks at Blue & Gray, along with the many volunteers, for putting together another fun-filled day.

A few photos from the festivities here.