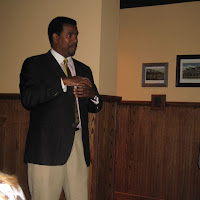 The dinner got off to a late start due to some overlapping events that were scheduled for Garrett during his visit to Fredericksburg. Once he arrived, Garrett provided a brief introduction to the brewery and beer/food pairing history. He also gave brief introductions prior to each course, including what to expect and why the selections were made.

The six-course dinner officially kicked off with Brooklyn Pilsner paired with Rappahannock Oysters topped with Cavier. A very tasty dish, the saltiness of the dish going quite well with the sharp pilsener. I'm a fan of oysters on the half shell, and caviar for that matter, so enjoyed this very much. I was pleased to assist those who didn't like oysters with clearing their plates. Next up, Brooklyner Weisse with Smoked Virginia Rainbow Trout and Tomato Bisque. This dish was the surprise pairing of the evening and was the subject of much conversation at our table. I tend to think of weisse beers as going well with fruit, or even with breakfast, so I was surprised how well this matched with the acidity of the tomato and the smokiness of the fish. This is a combination I will make a point of repeating.

The third course matched up Brooklyn Local 1 with Seared Chesapeake Scallops with Citrus Preserves served over Arugula with Red Pepper Vinaigrette. The scallops were tender and well-prepared. I personally thought the Local 1 overpowered the scallap flavors a bit, though others enjoyed it. After an entertaining and enlightening introduction by Garrett on the virtues of grilled meat and "crispy bits" we moved on to course four. This consisted of Lamb Chops over Latkes with Parisian Carrots and Thyme Beurre Blanc (white butter). The tiny chops were cooked to medium rare and very moist. The beer served was Brooklyn Brown Ale. Garrett told us the Brown Ale is the second most popular beer from the brewery. This slightly hoppy "Americanized" brown ale was the perfect accompaniment for the lamb chops.

If you weren't a blue cheese fan, the next course wasn't for you. However I am, so I eagerly awaited the cheese course. Three blue cheeses were paired with Brooklyn Local 2. The cheeses were Valdeon (with red pepper), Legendary Blue Roomkase, and Society Bee Roquefort. Garrett introduced the course by expressing some trepidation of how well the pairing would work. Opinions on the outcome were varied. I thought the first and last of the cheeses worked very well with the Local 2. This was the first time I was able to try Local 2, and found very tasty. Dark, sweet malt with dark sugar and fruit. I'll need to look for a bottle or two of this one.

Finally, the classic Brooklyn beer pairing, Brooklyn Black Chocolate Stout with dessert. In this case, dessert was a Strawberry Biscuit Cake with a bit of chocolate drizzled over. The beer came out a bit too cold, so we warmed the glasses in our hands while Garrett gave some history of this beer. (It was essentially his "resume beer" for Brooklyn Brewery.) After dessert there was time for everyone to talk to Garrett, get books signed, and grab a photo or two. All attendees also got one of those nice Brooklyn snifters to take home.

We had a wonderful evening out. The dinner was very well run, and the Capital Ale House staff did an excellent job of getting the foods and beers served efficiently. Special kudos go to Chef Adam for preparing a delightful variety of dishes. All too soon it was time to head home, still savoring the memories of the wonderful flavors and aromas we experienced over the course of the past few hours.

I've uploaded a few photos from the evening here.