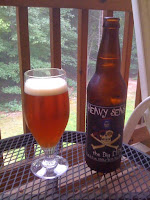 Clipper City Heavy Seas Big DIPA is the first in the new Mutiny Fleet series of big beers from Clipper City Brewing Company. I'm a big fan of Clipper City, especially their Heavy Seas line of beers, so I was excited to try this new addition to the lineup.

As is obvious by the name, Big DIPA is a Double IPA style. It pours a copper-orange color with a persistent and sticky head. Copious sticky lacing is left behind on the glass. There is a bready, caramel aroma that becomes more noticeable as the beer warms. The beer has a strong malty base and equally strong resinous, citrus rind hop flavors. The mouthfeel is slightly slick with a sweet, long lasting after flavor. The beer is labeled at 10.6% alcohol and there is some alcohol warmth noted but it is masked fairly well.

In keeping with the Heavy Seas tradition, Big DIPA is a hoppy, big beer. It's meant to be sipped and savored, and I did just that during a relaxing evening on the screened porch listening to the sounds of nature.
The Mutiney Fleet beers didn't make it to Fredericksburg so I had to travel to Norm's Beer & Wine in Fall Church to pick up my supply of Big DIPA. It was well worth the trip to pick up a few bottles of this limited release beer. (Sorry, I think it's all gone now.) And now that Clipper City has released the next beer in this series, Prosit! Imperial Octoberfest Lager, it would appear that another trip to Northern Virginia is called for.