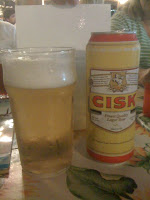 At the end of our pilgrimage, we were excited to spend two and a half days in the island nation of Malta. Malta has a fascinating history and we visited some of the oldest pre-historic ruins in Europe; the Tarxien Temples and the Ħal-Saflieni Hypogeum. We also visited numerous early Christian sites, including the grotto where St. Paul passed his three-month captivity on the island.

Malta has an interesting beer culture. There is just one brewery on the island, Simonds Farsons Cisk, simply called Cisk (pronounced chisk). The Maltese are quite proud and fond of the Cisk beers. Before the trip, I made a query on Twitter regarding beer in Malta and received an immediate reply from a representative of the Malta tourism group regarding Cisk. The beers are everywhere. You'll see them in two sizes of cans, in bottles, and on draft. Three different Cisk beers easily found; Cisk Lager, Hopleaf Pale Ale, and Blue Label Ale.

Cisk Lager is bright yellow with copious carbonation. The flavor is grainy and slightly sweet. This is the most popular of the Cisk beers and in every café or bar the bright yellow cans can be seen on tables. I enjoyed the ubiquitous Cisk Lager both canned and on draft several times during our short stay. The Hopleaf Pale Ale seems to be the next most readily found beer. The initial taste of the english pale ale is that of mild, bitter hops. Unfortunately the aftertaste was metallic and not pleasing at all. I only had this one once, so there's the chance that we had an off-flavor sample, but one that was left unfinished on the table. 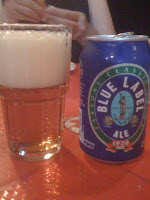 The final Cisk beer we had on Malta was Blue Label Ale. This one was a little more elusive. I didn't order it the first time I saw it offered. When I asked our Maltese guide about it, he replied "It's a dark beer." After two weeks of pale lagers, I was intrigued. Blue Label doesn't seemed to be offered in as many places as the other two so I went out on a search specifically for Blue Label one evening. When I found it, I was reading the can when the cashier told me "That's a dark beer." Well, dark is a relative term. The beer was only slightly darker than the Cisk lager, but definitely not anything I would label as "dark". However, it was a decent English-style ale. A little nutty with a bready malt base. When we were leaving Malta, I had the chance to order another Blue Label at a restaurant in the Malta airport. This time the beer was served on draft. The beer was darker than the previous serving, with a thick, creamy head that lingered to the end. (Pictured bottom right.) I suspect the beer was served on nitro, but didn't have time to investigate. 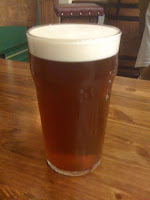 The Maltese beers are mild compared to the typical American craft beer. Indeed checking BeerAdvocate scores reflects that. (BeerAdvocate reviewers are generally biased towards "big" beers.) However, this only serves to illustrate one issue with review sites such as BA. It's my feeling that they don't take in to account the whole experience of enjoying the local foods. (Yes, don't forget beer is food.) After walking for a few hours in the hot Mediterranean air, that can of Cisk with the ice on top was especially refreshing. All of these beers would qualify as session beers; Blue Label has an ABV of just 3.3%. The beers are as much a part of the local delicacies as any food. One morning we headed into a local restaurant for breakfast. It was just 10:00 AM and the servers were already clearing away empty bottles of Cisk Lager the locals had been enjoying. Try that with your Double IPA.

Beer isn't the only alcoholic beverage local to Malta. We also enjoyed Bajtra Liqueur. The liqueur is made from the fruit of local prickly pears, which are the fruit of the widely-grown Opuntia cactus. Served chilled, this liqueur has a mild, watermelon-like flavor.

Cisk also makes a cola drink called Kinnie. We were given samples of this when we arrived at our hotel. The carbonated beverage is made from bitter oranges and herbs. It's definitely an acquired taste. Both Kinnie and Cisk Lager are also offered on board Malta Airlines. If more airlines served local beer, plane travel would be more enjoyable. (Air France, which carried us across the Atlantic, offered only Heineken.)

We enjoyed our visit to Malta very much. I was also intrigued to see the enthusiastic following for local Cisk beers, and how it was so much a part of the eating and drinking culture.