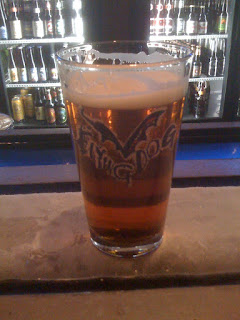 Edgy as always, Flying Dog Brewery is preparing for their 20th Anniversary in 2010 with the release of the equally edgy Raging Bitch Belgian IPA. I've been looking forward to trying this beer and this week it was one of the featured beers at the Capital Ale House Steal the Glass Night. Colleen and I stopped in at Capital Ale House Fredericksburg to try out the newest beer from Flying Dog.

Raging Bitch was served on draught in a Fying Dog pint glass. The beer is clear amber with a frothy off-white head. When I took the first whiff, I was struck by the citrus hop aroma. It was interesting that the more I sipped the beer, the more the clove and spice notes were noticed. The aroma is a complex blend of hoppy IPA and Belgian "funk." The flavor is a blend of citrusy and piney hops along with pepper spice notes. It's all backed up with a sweet, bready malt. The aftertaste is a pleasing, lingering bitterness with some mild astringency. This is an extremely flavorful and complex beer.

Going in, I really didn't know what to expect from a beer described with such contradictory terms as "Belgian" and "IPA." However I was not disappointed at all. The beer is a treat for both the nose and the mouth. The flavors are rich and bold. Raging Bitch checks in at 8.3% ABV. The alcohol is detectable but still well-balanced by the intense flavors. I truly enjoyed drinking this beer. A second glass was paired with a chicken tostada appetizer and the beer worked well with the spicy food.

The somewhat risque name did create some humorously awkward moments for the servers at Capital Ale House. When reciting the Flying Dog beers available for STGN, they'd often hesitate after saying "Raging..." I'm hoping these "Musings" aren't flagged for this review!

I am told that Flying Dog Raging Bitch will be available in bottles very soon. I look forward to picking some up when it shows up locally. Meanwhile, it can be found on draught where Flying Dog beers are served.