Taybeh, A Beer Without a Country

There's a popular quote from Frank Zappa that says "You can't be a real country unless you have a beer and an airline - it helps if you have some kind of a football team, or some nuclear weapons, but at the very least you need a beer." What if you have a beer but no country? Jay Brooks recently posted a video about the Taybeh Brewing Company in Ramallah on the West Bank. I had the opportunity to enjoy Taybeh beer last summer. My family was blessed to go on a pilgrimage to the Holy Land in August. Jordan and Israel aren't exactly known for a craft beer scene, but there was beer to be had. The weather during our trip could be described in one word, HOT. At the end of the day, nothing was more refreshing than a cold beer.

The beers most frequently encountered during our trip were Goldstar and Maccebee from Isreal's Tempo Beverages, Taybeh Golden, and Amstel Light (!). Taybeh is the only brewery in Palestine. Taybeh Golden is a German Pilsener style beer. It has a mild grassy aroma, with a mildly bitter citrus flavor. Light and refreshing were the descriptors that came to mind.

One evening as I was settling our bill with the hotel, the clerk noticed that I had been trying out different beers at dinner each evening, and he asked me which one I liked the best. I replied Taybeh and his face lit up. He told me he was from Ramallah and that brewery was located there. He asked if we were going to visit his home town, but unfortunately we could not. He went to his office and brought back this post card from the brewery and gave it to me. The people of the Holy Land live under much duress, and those in Palestine even more so. He was very excited that I showed an interest in his local brewery. (I am sorry that I cannot find the note where I wrote down the clerk's name.)

On our last day in the Holy Land, we enjoyed a Bedouin-style feast in Bethlehem, another town in the West Bank. Bethlehem is surrounded by a "wall" erected by the Israelis. The wall gets little mention in the western press, but think barbed wire, concrete, soldiers, or the Berlin Wall, and you'll get the picture. Photography in the area is forbidden so I can't show you. The Israelis will also close travel in and out of West Bank towns on a whim. Fortunately we were able to visit this town on the West Bank twice. The meal served on our last visit featured Taybeh beer and what seemed an endless stream of delectable foods.

As reported in the video, Taybeh isn't imported in the U.S. because it is labeled as brewed in Palestine, which the U.S. does not recognize as a country. If Taybeh is ever imported to the United States I'll be sure to buy it to recall our trip to the Holy Land, and to support people who live under very difficult circumstances. 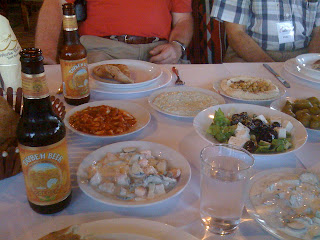