The host for the 49th episode of The Session is none other than Stan Hieronymus, of the blog Appellation Beer. Stan was the host of the very first Session, back in March of 2007. For the theme this month, Stan chose a pretty open topic "A ‘regular’ beer," leaving the interpretation open to the writer.

Blue & Gray Falmouth American Pale Ale is my choice for a "regular beer." I enjoy it frequently on draft, fresh at Lee's Retreat Brew Pub. Falmouth Pale Ale is a classic American Pale Ale. It pours a bright amber orange with a off-white head. The aroma brings mild citrus notes. The flavor is well-balanced between the citrus hops that hit first and the malt backbone. There's some lingering bitterness in the finish as expected. Clean and simple are the descriptors that come to mind.

Why is Blue & Gray's Pale Ale my choice as my regular beer? It's a good beer sure, but it goes beyond the beer. It's enjoying the beer at its source. The Blue & Gray brewery is visible behind a glass wall in the brew pub. You can enjoy your beer while watching the goings on of the brewery. On a recent visit, the aromas from the brewing were wafting through the pub. (It was the boil of Blue & Gray's Classic Lager to be precise.) The brewer Madison spent a few minutes at the bar chatting with patrons before going back to work. This is as close to a beer's source as you can get. I've often said in these pages that the enjoyment of craft beer includes the people and places that go along with it. For me, those things all come together when I'm having a pint of Blue & Gray Falmouth American Pale Ale at my favorite pub. 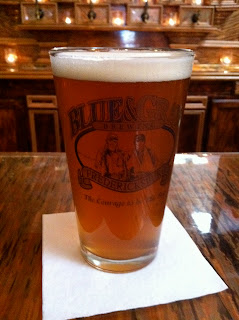 Update, March 8: Stan has posted a roundup of the Session posts.