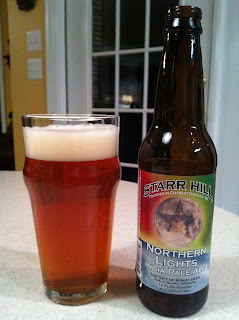 There are certain beers that I enjoy regularly, my "go to" beers so to speak. Yet despite that, or perhaps because of that familiarity, I often don't think to post reviews of them. An occasional mention in passing perhaps, but that's it. Starr Hill Northern Lights IPA is one such beer. It so happens that I opened one recently and made some notes for you.

Northern Lights pours an attractive amber-orange, the white head makes but a brief appearance, leaving behind a thin layer. Moderate lacing sticks to the glass. The aroma is sweet malt with a bit of citrus. The effect on the nose is mild, but in the mouth the beer really shines. The flavor is full of citrus; grapefruit and orange rind, but tempered by just a hint of sweet malt in the finish

The mouthfeel is slightly resiny, leaving a sticky residue behind on the lips. The bitterness lingers in the mouth for an extended time. While I wouldn't describe the flavor sensation as extreme, I think bold is certainly an appropriate word to use.

Northern Lights was originally a seasonal release by the Crozet, VA Starr Hill Brewery. According the brewery's website, this fine beer used to be called "Stinky." It's now a year-round beer, and for that I am glad.