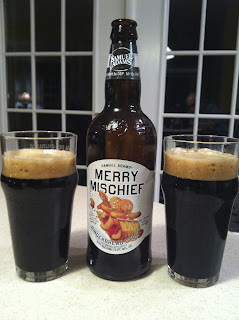 As noted planned, Colleen and I shared a bottle of Sam Adams Merry Mischief Gingerbread Stout earlier this week. It was an unexpected treat, and on a "school night" even.

I will admit to a bit of trepidation when opening the beer. So many spiced beers start out being enjoyable, but, for my tastes, often quickly become tedious. As is often the case with fruit beers, I also have spiced Winter Ales left over from six packs purchased years ago.

Merry Mischief pours a deep, dark color with a rich beige head. It smells like a spiced beer. The spices dominate — cloves, ginger, nutmeg — hmm, like a gingerbread cookie. Go figure. The spices take the front seat in the flavor too. However, they are mitigated by the roasted, and slightly sweet, stout. The finish leaves behind a bit bit of sweetness and spice, with a "sufficient" alcohol warmth. At 9% ABV, this is a beer best enjoyed while sipping. Of course that mode of enjoyment often goes by the wayside when one is trying to make notes for a review.

I was very happy that Colleen decided to grab this one to try out. I'll close this post with her statement, which sums it up quit succinctly, "I think I'll get a few more bottles next time I go to the store."