Shades of Brown at the Range

I made it over the range for a while last weekend. It was a sunny, but still cool afternoon. Despite the relatively nice weather, I didn't expect a long wait to shoot. It seems to me that folks are shooting less, and holding on to what ammo they have available. The small pistol bay was open when I arrived so I set up a couple of USPSA targets in the dappled shade of the leafless trees. The berm dirt pile was recently refreshed and the dirt blended well with the targets and the trees in the background. 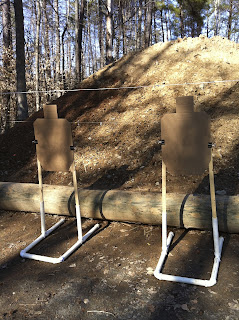 I had packed just 100 rounds so that I was not tempted to go through a large quantity of ammo. Rationing and wise usage are the keys to getting through the current scarcity. I know that if I have the rounds with me, I'll shoot them. I began stocking up for this season's matches before the shortage turned extreme, so I'm in pretty good shape for at least the start of the local USPSA season but still mustn't be frivolous. Gone are the days of blowing through 200-300 rounds in an afternoon at the range.

Most of the shooting I did was from about the 10 yard line. The majority of time was spent working on target transitions; shooting both the lower and upper A zones, both while standing still and on the move.

My solitude was briefly interrupted when another club member come up to talk. We chatted a bit about ammo supplies and prices. I noticed he had a bucket in hand, and eventually he wandered over to where my brass lay, and remarked "You don't want your brass, right?" Well, as a matter of fact, I do. Move along friend.

I noticed during my visit that work is progressing on the long-awaited third pistol range. That's a welcome sign. I am sure the current ammo supply shortage will turn around eventually and the ranges will once again be crowded with happy shooters so more space will be a good thing.

As I emptied my last box of ammo, I noticed I did have a couple of partial boxes in my range bag, so I gave in and shot just a little more. I was having a good session, so extending my session was certainly justified.