The beers of Weihenstephan Brewery in Germany were featured for this week's Steal the Glass event at Capital Ale House. Six different beers were on tap. Fans were able to order any of the six in a tall Weihenstephan glass, or try a flight of small tasters of all six, which also included a glass to "steal." I opted to do an exploration of all six beers. 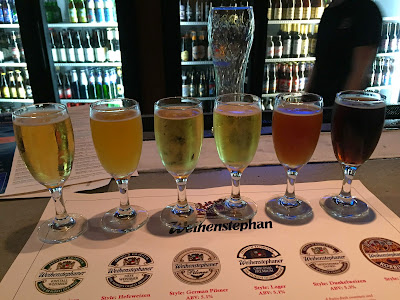 The beers are all moderately low alcohol beer. The Doppelbock checks in at 7.4%, while others range from 5.1% to 5.4%. This made enjoying the beers quite easy, and I ran through them fairly quickly as well. None of the beers were new to me. Weihenstephan's Hefeweissbier is considered by many to the original and authentic Hefeweizen. The Dunkelweizen and Dopplebock are both long-time favorites of mine. In fact, all of the beers are well made and great examples of classic German styles.

It was a great opportunity to try a range of beers from the world's oldest existing brewery. And apparently many others were looking forward to the event as well. When I first arrived at Capital Ale House for the event, there was not a single seat open at the long bar, and there were many groups waiting for tables. Fortunately a seat at the bar opened up without too long of a wait. I had a tasty dinner of a lamb gyro "burger" while tasting the beers. I enjoyed all the beers, but decided to cap off the evening with a hoppy American-style beer, which is a story for another post.