I'd been looking forward to shooting the monthly Cavalier IDPA match this weekend. When the alarm went off Sunday morning, I was still feeling the affects of a springtime cold that had been clogging my head and lungs, but decided to go shoot anyway. After all, you don't get to pick only when you're totally healthy to need your gun for self defense.

After checking in at the match, I put on my ear protection, and thought "That doesn't feel right." It turns out one of the ear pieces was partially broken from the headband, and the cup wasn't fitting tight against my head. I typically keep emergency foam ear plugs in my bag but I had given the last of them to another shooter at a recent match. "Does anyone have duct tape?" I asked. Fortunately a friend had a spare set of ear plugs that he graciously loaned me to supplement my broken gear.

Now properly equipped it was time shoot! Stage 1 was an eight target course that had the views of the threats strategically hidden with walls and barrels. The was a lot of movement, and careful use of cover was required. I used some time bobbling to find the proper shot views, but ended just 3 points down on the stage. 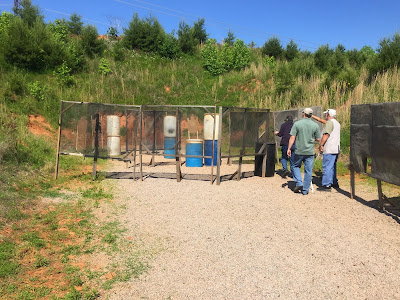 Stage 2 had us starting seated, with the loaded gun on the table, and looking at an interesting array of targets and two swingers. Hitting a stomp plate under table with our foot set the swingers in motion. One swinger held a non-threat that moved back and forth in front of two threat targets, while the other was a threat target swinging back and forth from behind a non-threat. Those were engaged while seated, as well as a fourth target to the right. After that we moved down a hallway to find three more targets. It was a fun stage and I managed to avoid the moving non-threat, though I was 7 points down for the stage.

The third and fourth stages were quick runs that shared the same bay. Stage 3 had five threat targets and 2 falling steel poppers. We started facing a wall and moved towards the left, engaging the first three targets, before moving out to find the two steel and final two targets. I was zero down for the stage.

Stage 4 started with three close targets that were engaged in tactical sequence. The final three targets were hidden behind a wall a few yards down range. The shooter had the choice of engaging one of the latter group from the start position, and then run to the wall for the last two. Alternatively, the three final targets could be all engaged from around that back wall; from either end or both ends, depending on how far you wanted to lean around cover. I opted to take the longer shot, mainly to avoid the hard lean around the wall. Frustratingly, I dropped just one point by moving too fast away from a close target before turning to take the longer shot.

The match was a lot of fun with some interesting stages. Despite the stuffy head I still managed to finish 10th of 27 in my division, and 16th of 41 overall. I still feel not smooth when moving into position behind cover, after so many years of USPSA and running to blast targets in the open, but the I've been practicing that on the dry fire course see up in my basement. I left the match with a smile on my face, and overall was pleased with how I ran the stages. And I think the bit of exercise in the sun helped me fight off the head cold too. I'll add that to the "health benefits of shooting" list.