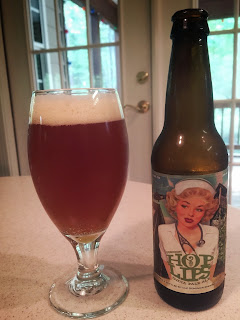 Just a couple weeks ago we were at an event where the bar was stocked with good beer, including selections from the Dominion "Pinup Pack." I was telling friends about an upcoming addition to the series, Hop Lips IPA, that I hadn't had yet but was looking forward to trying out. As if the brewery heard my laments, just a few days later a smile-inducing box appeared from Fordham & Dominion Brewing, containing samples of that new beer.

Being an IPA fan, I was of course anxious to try it out, and finally had the chance this week. Dominion Hop Lips IPA pours a deep marmalade color with a thick white head. The foam is persistent, leaving behind copious lacing. (The head was either persistent or I drank the beer too quickly.) The aroma is earthy and malty, with a hint of tropical fruit. The flavor profile contains all of the above, with the addition of bitter citrus hops. The finish had lingering bitterness and a hint of white wine-like astringency. Hop Lips hits a tasty balance of the rich malt base and citrus fruit. At just 6% ABV, it's at the lower end of the range for an IPA, making it quite suitable for Summer sipping. Hop Lips should be appearing on Mid-Atlantic beer shelves soon.

Even though founded in Virginia in 1989, Dominion Brewing has never before brewed an IPA. I'm glad they finally got around to it in 2015, adding Hop Lips as a year-round addition to their lineup. Dominion Brewing and Fordham Brewing joined forces in 2007.