It's been a while since I was able to get out to enjoy the Wednesday afternoon IDPA match at the Black Creek range, but the stars aligned this week for a good mid-week diversion. When I arrived at the range, I was surprised to hear no gun fire. It was a slow day and I had arrived between shooters. So I woke up the match director and shot without waiting. It was sort of an odd feeling to walk up, load mags, and shoot — like having a private match.

Three stages awaited, for a total of 38 rounds minimum. The first stage saw us me standing behind a barricade, and upon the start engage four targets while on the move across the stage. The targets were hidden behind barrels and became visible as you moved. I had my best finish on this stage, with a second place overall, which helped make up for the next two stages.

Stage two used the same four targets as the first stage, but they were shot from behind another barricade. Two targets were engaged from each side of the barricade, with a mandatory reload with retention in between, and three hits were required on each target. Since I've been shooting IDPA exclusively this year, remembering to retain the partially loaded magazine is becoming second nature at least. 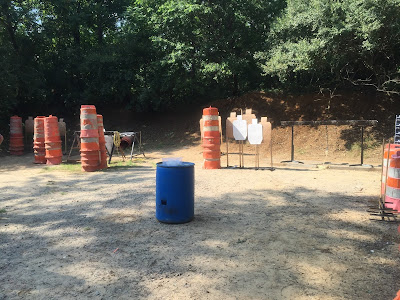 The final stage consisted of two strings of fire, and brought into play one of the match director's favorite tricks — strong hand and weak hand only shooting combined with non-threat targets menacing the shooter. I didn't shoot this stage as well as I wanted, or expected, but it was still fun. It points out where I need to focus some practice time. Both strings of fire on this stage started with the shooter facing up range. The first string, from around 7 yards, required two shots on each target in tactical sequence (1-1-2-1-1) fired strong hand only, followed by three heads shots, weak hand only. For the second string, we moved back to the 10 yard line and repeated the same pattern, freestyle then strong hand only.

The Black Creek matches are quick, and it's not unusual for folks to shoot a second gun, but I had never done this myself. It's about an hour drive for me to the range, so it makes sense to shoot it again for a "better bullet to gasoline" ratio. I shot the second time in the new Compact Carry Pistol division (CCP) and I actually finished better overall with the smaller weapon. The reduced ammo capacity of the smaller gun came into play on the third stage; nine shots required and nine rounds in the gun to start. As I went to slide lock on both strings I knew I had shots to make up but opted to not do a reload, and accept the penalties. In retrospect, it might have been better to take the time to reload and fire another round or two.

It was a fun match. It's good to have successes, including pinpointing areas for improvement. This gives me things to focus on in future practice sessions; it's time to add some non-threat targets to my SHO and WHO practice. The weather cooperated in being partially overcast and, relatively speaking, not oppressively hot. I even made it back in time to get to the first Summer swim meet of the season to see our son swim. That meant no refreshing beer after shooting, but that's certainly a worthy tradeoff.