After a Saturday of torrential rain, Sunday dawned sunny and unseasonably cool as I headed out for the monthly IDPA match at Cavalier. I did have to make a detour along the way after encountering a road closure due to high water. Fortunately my GPS found an alternate route and I arrived at the range without too much delay.

The match consisted of four extremely fun stages, requiring about 50 rounds total. On Stage 1, we started with the loaded gun and a spare magazine on a barrel, with hands on a popper. At the signal, we pushed the steel target forward, activating a swinging target, and retrieved the gun and magazine. After engaging the swinger, we moved up range to deal with 5 more targets from two shooting positions. I was 5 points down on the stage; I think 4 of those were on the fast moving swinger. 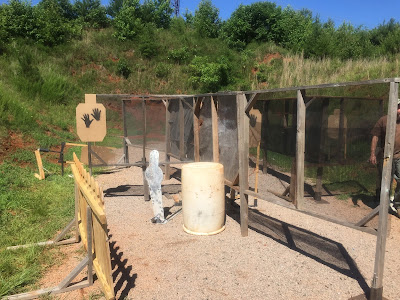 The next stage started seated at a table, and required the first three targets to be engaged while seated. Then the shooter moved left to engage a close, then a far target, before moving downrange to find the final two targets around the end of the wall. Again, 5 points down on the stage. 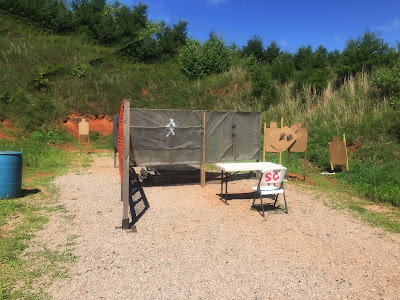 Stage 3 was a "speed stage" with three stationary targets, and two disappearing targets activated by falling steel. The moving targets were quick, requiring fast followup shots after hitting the steel. On the first mover, I got the shots off quickly and was just down 1. On the second mover I hesitated waiting for the target to move, and ended down 6, finishing 9 down for the stage. This was a stage I would have liked to shot a few more times just for practice, or at least the two moving targets. I posted a short video showing the targets in action here.

The final stage was another interesting challenge. Starting with the loaded gun on a barrel, and all spare magazines placed inside an open cooler. At the start, we grabbed the gun and moved forward to engage two targets behind some barrels. After stepping back to pick up the cooler, the rest of the stage was shot while moving uprange. We were required to carry the cooler with us; most shooters engaging the next two targets strong hand only, around the left side of a wall. It made for a bit of body contortion, especially as I hugged the wall too closely. Continuing uprange the cooler was left on another barrel. Since all reloads had to come from the cooler, and any non-empty mags retained in the cooler as well, a quick reload was made at the drop off point, before moving further uprange to the final three targets. There was lots of fun to be had on this run and I was just 1 point down for the stage. 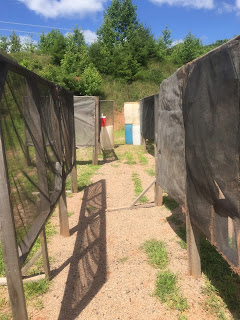 I felt good about my shooting at this match. There were a few things I might have done differently in retrospect, but overall I was pleased. I finished 12th of 33 overall, and 7th of 19 in my division. The stages were all very interesting, each offering unique challenges. There was a group of fun folks on our squad, and the match moved along quickly. Fun stages, the sun shining, and the temperature moderate, I really couldn't have asked for a more enjoyable morning of shooting.