These Old Eyes at the IDPA Match

I've written about my experiences with vision correction and shooting previously. It's been just over a year since I last updated the lenses in my shooting glasses and a regular eye exam about 3 months ago showed no significant change in my vision. However, recently I've begun see a less than sharp view of the sights when using the prescription inserts. Earlier this week during some dry fire it became abundantly clear (heh) that I wasn't seeing the front sight in focus. I wrote it off as being due to low room light, and I found the practice session went a lot better not wearing the Rx glasses.

At this Wednesday’s Black Creek IDPA match as I did a few practice draws in the safe area, even in the filtered sunlight, it was still difficult to see a outline of the front and rear sights. Removing the prescription insert from my glasses allowed a very sharp sight picture. I finally decided to shoot the match without the Rx inserts. Sure the targets were blurry, but they’re supposed to be with a proper sight picture, right?

The match went pretty well for me. As always, the match director made good use of the single shooting bay by using the same targets in multiple stages, and shooting them from different positions and with different requirements. Stage 1 started with the gun on a barrel, shooting six shots through a tunnel created by a sideways barrel and barricade combo, to a target with only the center portion available. One miss and one low shot left me 6 down. The narrow and blurred target zone gave me a good feeling of the vision challenge to expect on the rest of the match. 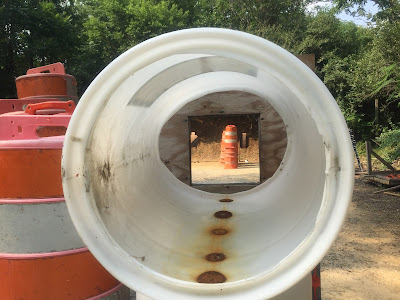 The next two stages involved shooting four targets from cover behind stacks of barrels and wooden wire spools. Each of the targets required 3 hits each. The shooting order and gun start location changed between the stages. There were options on how you engaged the targets, and most of the views were fairly limited.

The fourth and final stage made use of the entirety of targets and props that made up the first three courses of fire. There was an added twist of requiring a varied number of hits on the targets. We started at the first stage, and put a minimum of two hits on the narrow target through the barrel. Next, we advanced toward the positions used for stages 2 and 3. The right two targets required 3 hits each, and the last two on the left required 4 hits each. Positioning was interesting as there were numerous ways to shoot the stage, all the while keeping in mind cover and engagement order. I lost track of my shot count at the last position, between a reload and a quick malfunction clearance, so ended up putting extra shots on the targets. It all worked out in the end as I finished the stage down 0. 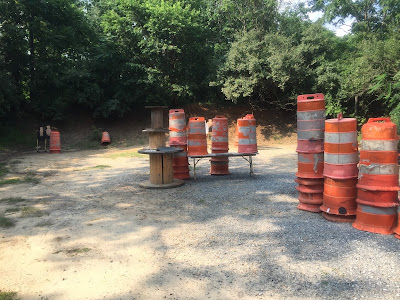 It was a fun, but hot, match. I didn’t have time to shoot a second gun this time, but after the clean finish on the last stage it was good to stop while I was ahead! The lack of focus in the distance didn’t appear to have much of an effect, and by the end of the match, I didn’t really notice. I couldn’t see my hits on the targets but they say you should “call your shots” anyway and not look for the holes in cardboard. I’ve talked to some other shooters with distance correction who just accept the blur of targets in the distance when shooting. I’ll wait a bit before deciding if I need to update my prescription. I do especially like the idea of not looking through a double layer of lenses, and I found I didn't need squint my left eye to pick out the front sight. I recently switched to a fiber optic on the front sight which also helps in finding that front post.

Sometimes the limitation in shooting is the equipment, not the store-bought stuff, but the parts we are born with.