This weekend I again made it to the monthly IDPA match at Cavalier. The temperature was in the upper 70's when I left the house Sunday morning, but had risen to the upper 80's by the time I was shooting. That's not too bad for July in Virginia, especially with the occasional breeze that passed through.

The first stage was a quick stage with 6 paper targets and a couple of steel poppers. All targets were engaged from behind cover from several shooting positions. I had to take a couple make up shots on the steel, and again on the final target where I was attempting head shots. I still did okay on the stage, with zero down, but that was my clue that I needed to slow down and pay more attention to the front sight.

Stage two had seven targets and started in the center of a wall, where we first ran to the left to engage a couple targets, than across to the other side for a falling steel popper. After that we opened door in the center to engage a target from cover, before moving through the door to find other targets among the walls. I was down 1 for the stage 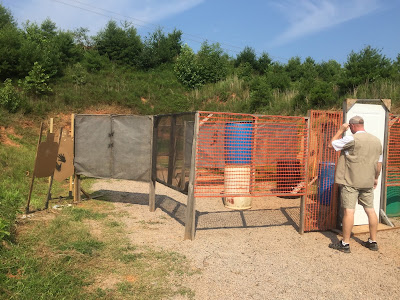 An interesting challenge was presented on Stage 3. You begin mid-stage, engaging a couple targets while retreating up range. Crossing the stage there was another target to be found. Finally, there were three targets that had to be engaged from behind both vertical and low cover through a picket fence. Once down and shooting under the "wall," only two of the targets could be seen. To engage the third, you had to shift positions to be further over to the right. Some of the younger, more nimble shooters shot the first two targets from kneeling, then dove into a prone position to find the last target. I chose to take a knee for the first two, and then make sort of a hop, switching knees, to the next position to finish. It may not have been graceful, but it got the job done with zero down on the stage. 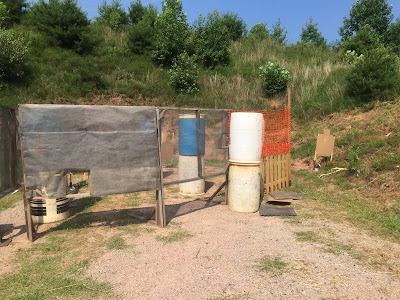 Finding the last three targets behind some barrels and through the fence was somewhat difficult too. A number of shooters ended up engaging one of the first targets twice, and not engaging the final target at all. IDPA rules allow you to view the targets from the shooting positions, but you can't dry fire the stages and rehearse your positioning. That's something I've commented previously that I like about the sport, but this stage I was thinking I'd sure like to try it before I'm shooting! 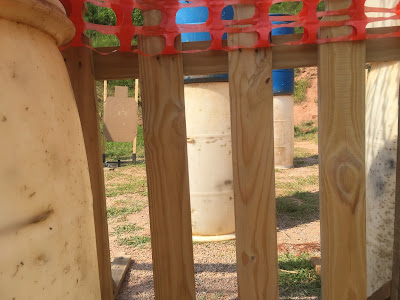 Stage 4 required us to make short sprint before shooting and included the longest shots of the match. We started mid-bay, facing down range. At the start we had to run back up range to a table behind a barricade, where we had staged all our magazines. We drew and loaded the gun and engaged three targets from each side of the barricade.

The match ended with a really fast and challenging course of fire. Standing about 7 yards from two drop turners, the gun was holstered and the drop turner activation rope held in the weak hand. At the start signal you pulled the rope and drew the gun, or if you were thinking, drew the gun then pulled the rope, activating the targets. Quick shooting was required to get two hits on each target before they disappeared. I had a -1 and -3 hit on each, but at least got all four shots off and on paper.

I was pleased with my hits and time overall. Since I don't get much practice time on the range these days, each match is really a practice for the next. The match was a lot of fun, with some different challenges. It was also very efficiently and quickly run, our squad was done shooting by around 11:30. I found the "Classic Vinyl" station on the radio, turned it up loud, and had a pleasant drive home through the country side.