Instead of the normal weekly IDPA match at Black Creek, this week's event was designated a "fun match." This was done to make a short, quick event, in deference to the heat and humidity, and possibility of storms. Even though we shot in IDPA divisions the similarity ended there. Three plates racks were set in front of three "Q" style targets to create a stage shot in three strings. 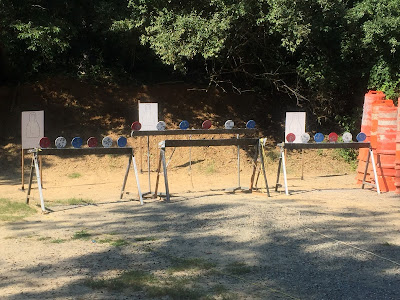 For all strings the shooter started facing up range, hands above shoulders, gun holstered and loaded to division capacity. The first string required two hits on each paper in any order, and all the red plates knocked down. On string two, the three paper targets were engaged in tactical sequence, followed by the white plates. The final string required the paper to be shot in tactical priority and tactical sequence before knocking down the blue plates.

The narrow "down 0" area on the paper targets made for a nice challenge. It's also been a few years since I got to shoot at a plate rack. I needed a few make up shots on the first two attempts, but cleaned it the third time. Of course, that third run was when I had my only miss on paper! Overall though, I was pleased with my shooting.

Even though the match was short, total time shooting was just 48.3 seconds before penalties, it was still worth the trip. I had debated about going at first, but I had a good time shooting, and enjoyed getting in even that bit of range time. Since I can't get in much good practice due to restrictions at my local range, I'll take the opportunities I get. To top it off, on the way home I had time to stop by Center of the Universe Brewing to cool down with some good beer. And that's a story for another post.