Dinner, Beer and the Evening Parade

Friday evening we made our annual trek into Washington, DC to enjoy the Evening Parade at "8th and I," the Marine Barracks Washington. In order to avoid driving, and parking, in DC we make an extended travel routine; drive to the southern most Metro station, take the subway into the city, and walk the last few blocks. It's long and time consuming, but easy.

We plan our trip to include a leisurely dinner at Molly Malone's Saloon. The pub is directly across the street from the Marine barracks, which means we can relax and not worry about the time needed to arrive at the parade. It's also a chance to try out local beers.

I opted for a beer, and brewery, I was not familiar with, Rowdy Rye Beer from Atlas Brew Works. The beer pours a dark cola color with a tinge of caramel with a thin, but persistent beige head. The aroma is bready and sweet with a hint of citrus. An earthy flavor base combines toasted bread, peppery spice and a touch of sweetness. It's somewhat ESB-like. My light-fare dinner of grilled wings allowed me to squeeze in a second glass before heading over to the festivities at the Marine barracks. 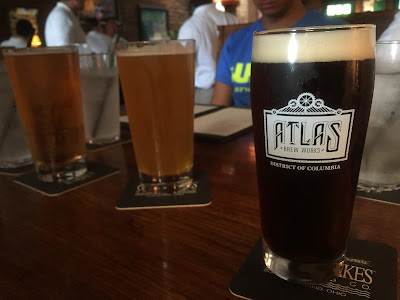 The Evening Parade is an impressive event in an historic setting. The music and pageantry, and the precision drills, never fail to impress. Despite it being a July evening in the city, the temperature was not overly oppressive, and we even had a nice breeze on occasion.

After the long trip home, as with previous trips, I had to be up early in the morning to head out for a pistol match. Unfortunately heavy rains caused the cancellation of the event, but not before I was up and showered. I even went out to the rendezvous point where I was to meet some new shooters going to the match, in case they hadn't gotten the word. It was a disappointing turn of events as this was the second time in a week that my plans for shooting had been cancelled. Instead, I had a lazy Saturday at home; which I guess in itself is not all a bad thing.