After a good range practice session yesterday, I returned this morning to join a couple of friends for some shooting fun. We got an early start to beat the crowds that were sure come later. The time was spent "just shooting" and enjoying friendly conversation. In fact, we probably spent as much time chatting as shooting, but that's the way it should be when you're just out to have fun.

I got to shoot a gun I hadn't shot before, and I also spent some time shooting my usual carry gun. I don't shoot it as often as a I'd like, mostly because it means cleaning it right away before I carry it again. Interestingly, I had last cleaned this gun less than a month ago, yet when I fired the first shot, I watched a clump of lint float away from the back of the slide. Note to self: Keep an eye on that, especially since it's sweater season now. 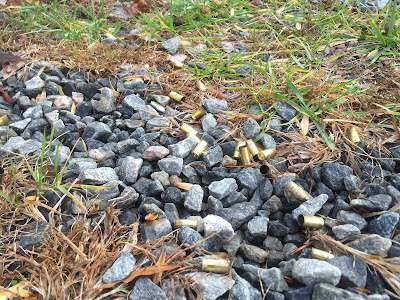 It was a treat to hit the range two days in a row, spending time with friends doing what we love to do, on another unseasonably warm day. And I'm pretty sure we had more fun than the folks fighting the crowds at the stores.