The last IDPA match of the year at Rivanna was one to remember. The stages were interesting and challenging, and simply put, just plain fun. The morning started off quite cool; I watched the dashboard thermometer bounce between 26° and 32° as I made the drive to Charlottesville. However the sun was shining bright once we started shooting. making for a pleasant morning.

Our squad began on what was probably the most intimidating stage of the match. You started off engaging three targets in tactical sequence while backing up. Then from cover there were four more targets partially hidden behind three non-threats. And, in front of each of those non-threats were small steel plates, a miss on any would be a hit on a non-threat. I ended the stage 8 points down, hitting the steel and avoiding all non-threats. I breathed a sigh of relief after that one.

Next up was a long course of 18 targets, all of which required one head shot each. Starting out, there were three targets to be engaged while seated. Next, three more to be shot on the move. Finishing those, you moved to a port in a wall to find six more targets. Moving to the last position, you went prone to engage six more sideways or upside down targets through a ground level port. I have shot my pistol from prone only a few times in my life, so I was looking forward to it, though not totally sure how I was going to do it. At the end all my hits were the the required head shots. Alas, I managed to skip one of the targets though the wall port, and earned 5 down and a FTN. 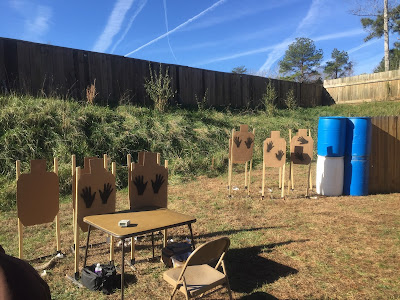 After two stages focusing on accuracy, it was time for some one-handed shooting. The next stage started with the gun placed on a barrel in front of the shooter. Picking it up, the first two of five targets were engaged with three rounds each, shooting weak-hand only. Switching the gun to the other hand, the last three targets also got three hits each, strong-hand only. All the the targets were covered by t-shirts so hits were not visible on the targets. Ending up just 3 points down was a nice pick-me-up after the skipped target on the prior stage.

The last stage we shot was another fun one. It started out with the classic "drag your buddy to safety" scenario, a stage set up I had not experienced. Your loaded gun was placed on the dummy's chest to start. At the start you ran to "Earl," retrieved the gun, and dragged the body to safety. There were three targets to be engaged as you backed up while pulling Earl. Two of the targets were quick up-and-down targets activated by dragging the dummy backwards. Earl had to be pulled around the corner behind a wall; I watched many shooters drop the body after engaging the last up-and-down target, earning procedural penalties. After getting Earl to safety, there were three targets to engaged with three rounds each, through a snow fence vision barrier. The final position had three more targets, engaged from cover, requiring a neutralizing hit (at least -0 or -1).

I too dropped Earl after shooting the last mover, but remembered right away and dragged him to safety. Alas, I forget about the three hit requirement on the middle three targets. I did shoot one of them three times as I made up a shot I didn't feel good about. So at the end, I was 14 points down, 10 of which were earned from that oversight.

Overall, it was an exceptionally fun match. I felt I shot very well, excepting the mental errors. I've been struggling a bit with accuracy lately, so was very happy to shoot so well this match. Due to a busy schedule, at work and home, I have not shot at all, nor even dry fired, since the last Rivanna IDPA match, five weeks ago. A few practice draws in the safe area before the match was the extent of my practice the last month. This was likely the last competition of the year for me, hopefully I'll get in some practice before January's matches.