The first match of the year for me was the annual IDPA BUG match held at Rivanna. I've had lots of range time recently, but this was the first competition opportunity since November. Over the past few weeks I've put about 500 rounds through a new gun and was excited to put that practice time to test in a match.

In order to accommodate shooters who had yet to acquire holsters or multiple magazine carriers for the new IDPA division, all stages had table or low ready starts, and any magazines were staged on tables or barrels. All guns and magazines were loaded with just six rounds per IDPA rules.

The first stage my squad shot had the shooter seated at a table, facing a falling steel popper that activated two drop turners, which fell at essentially the same time. You had to be quick to put two shots on one, and then catch the other on its second exposure. I posted a video of the movers in action here. It was quite the warmup to get the match started! I've often lamented that I wasn't able to shoot some stage twice, and this time we did. Each shooter ran the stage twice and the times were added. 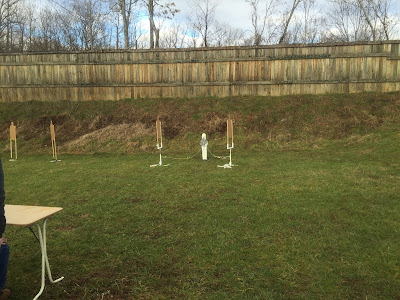 Next up was a stage requiring SHO and WHO shots only. The first string was shot left hand only around the left side of the barricade, and the second using the right hand only from the right side. If anything, this stage showed me I need to work more on shooting single handed with the small gun.

For the next stage we started with the loaded gun and extra magazine on a barrel. Picking up the gun, we engaged three targets in tactical sequence, did a reload on the clock, and reengaged the targets with two head shots each.

The final stage was a field course, with magazines set out on a couple of barrels. At the start, you engaged three targets while backing up. Grabbing a fresh mag from a barrel, the next three targets were engaged through a small port in a wall. The center target of that array was very low to the ground and close to the wall; it made for a stretch to get gun up an over to make the shot. Moving to the last position, another reload and three more targets from cover completed the course of fire. 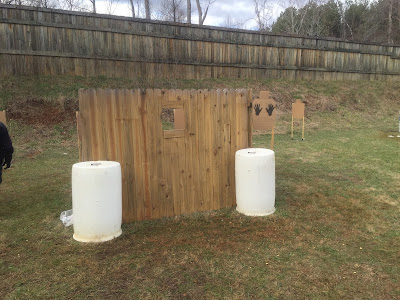 This was the first time I'd shot a BUG match. I had a great time despite it turning into a longer than expected day. The stage with the popper and drop turners created a backlog of shooters due to the time required to reset (twice for each shooter.) However, that time was spent socializing with other shooters, and the weather was surprisingly pleasant for January. I was mostly pleased with how I shot, using the small, and new-to-me gun. I won't be shooting it every match, but I expect I'll break it out from time to time in future matches as it is surprisingly fun to shoot.