The 10 US sailors taken hostage have been released, and no doubt the story will fade from view in a day or two. Prior to their release, the Loser-in-Chief gave his last discourse on how much he despises the United States of America State of the Union speech. Notably absent was mention of the nine men and one woman taken by the Iranians. Former Navy SEAL Matthew Bracken penned a very interesting comment over at American Thinker...


I rarely pull out my dusty old trident, but in this case, here goes. I was a Navy SEAL officer in the 1980s, and this kind of operation (transiting small boats in foreign waters) was our bread and butter. Today, these boats both not only had radar, but multiple GPS devices, including chart plotters that place your boat’s icon right on the chart. The claim by Iran that the USN boats “strayed into Iranian waters” is complete bull$#it.

For an open-water transit between nations, the course is studied and planned in advance by the leaders of the Riverine Squadron, with specific attention given to staying wide and clear of any hostile nation’s claimed territorial waters. The boats are given a complete mechanical check before departure, and they have sufficient fuel to accomplish their mission plus extra. If, for some unexplainable and rare circumstance one boat broke down, the other would tow it, that’s why two boats go on these trips and not one! It’s called “self-rescue” and it’s SOP.


Bracken has real world experience and I think valuable insight, and his entire post is worth a read. 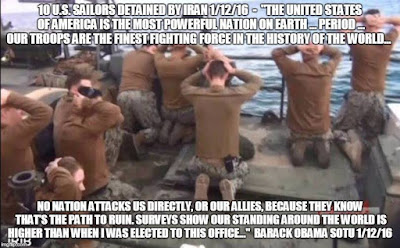