While I have several pistols that I shoot, and carry, regularly, my SIG Sauer P226 E2 is by far my favorite. Since I purchased it in 2010, I've put somewhere around 60,000 rounds through it. It's had several sets of new springs put in, but other than a new guide rod, it's still original equipment. Lately I've been thinking about replacing the barrel. The gun still shoots more accurately than I do, but I figured I wouldn't wait until there's a serious problem. 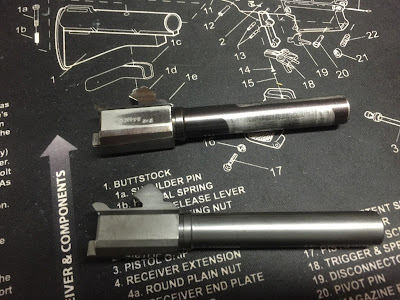 I opted for a factory replacement from SIG Sauer. After looking at the online store, I called the shop to ask a couple questions. The guy on the phone was friendly and very helpful. After I thanked him for the info he offered to get me a better price than what was posted online, so I ordered right then and there; for 15% off!

The barrel dropped right in and I ran over to the range to put 100 error-free rounds through it — and it still shoots more accurately than me. I was also struck how different the gun looks with a black barrel rather than a worn silver one. As long as the slide and frame continue to hold out, I expect to continue shooting this gun for a long time.