After an exhausting day on the range, we spent Saturday evening and next morning rehydrating before heading off on a brewery road trip on Sunday. We employed our favorite college student to act as chauffer for the day

Our first stop was Devils Backbone on Route 151 in Nelson County. I almost didn’t recognize the place; there’s been a lot of expansion on the property since our last visit three years ago. We were quickly seated and got our beer orders in. Colleen and Checkered Flag chose their favorite style Hefeweizen, Trail Angel Weiss and Apricot Weiss respectively. I opted for one of my old favorite styles, Altbier, and chose Devil’s Secret. This German-style beer is a collaboration between Devils Backbone and Apocalypse Ale Works. I enjoyed the rich, dark, Dopplebock-like flavor very much. 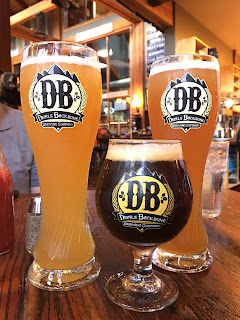 While walking between the car and the restaurant entrance we were treated to the aroma of the meat being smoked. There was no doubt I was going to partake in the house-smoked barbecue. My pulled pork sandwich was rich in spice and smoke, and went perfectly with my beer.

Finishing my food and first beer, I decided to stick with the German theme, and enjoyed a pint of Meadow Bier, a delicious German-style Pilsner. Then it was time to move on to our next stop so we had the driver bring the car around. (Actually, we walked to the car, but we did enjoy more than a few chauffeur jokes at my son’s expense.)

Soon we found ourselves at Bold Rock Cidery. Unlike our last visit the weather was not conducive to sitting on the large outdoor deck area taking in the scenery. We opted to enjoy the comfortable indoor lounge area, while watching various Olympic activities on several TV screens. We ended up sitting and enjoying ourselves for longer than intended. I was sipping on an IPA, or India Pressed Apple, a cider dry hopped with five hops for a tasty blend of tart apple cider and sweet, citrus notes. I found it quite enjoyable. Checkered Flag drank a Vat #1 while Colleen sipped a Prime Lime, a refreshing drink made with their Premium Dry cider and lime juice and served over ice. 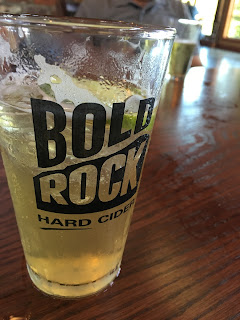 Continuing on our way, we made an unplanned stop at Blue Toad Cidery. Blue Toad is a New York-based cidery that opened in Virginia last year. The tasting room had only two other visitors when we arrived and took our seats at the bar. We looked over the one cider menu we were handed to decide what we wanted to try out, receiving no information or suggestions from the lady behind the bar. A few other folks come in while we sat the bar, and still it seemed the atmosphere was less than welcoming. I remarked that it was almost as if we were interrupting the bartender’s alone time; either she didn't want to be there, didn't want us there, or both.

We ended up ordering pints of three cider varieties; Back Cherry, APA Triple Hopped, and PommeGranny Batch 1. Since this was an spur-of-the-moment stop, we discussed skipping the next brewery on our agenda, Starr Hill in Charlottesville, and head straight to South Street Brewery for dinner. However, after a few minutes of sitting at the Blue Toad bar, we opted to leave our drinks and the unwelcoming atmosphere and try to make it to Starr Hill after all.

On the way to Starr Hill Brewery, we came upon an accident just as the emergency equipment was arriving, and were directed to turn around as the road was now closed. After a slight detour and GPS rerouting we arrived at the brewery shortly before last call. I had time to enjoy a pint of Reviver Red IPA. I’d seen this seasonal in my local grocery store, but had just never gotten around to trying it. I was not disappointed and I think I may see if it's still in the store. Pints of The Love Wheat and The Hook were also ordered by the rest of our party. 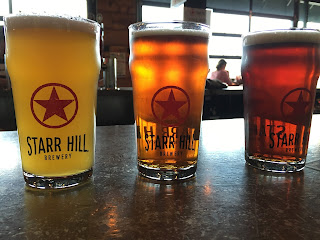 Starr Hill is one of my favorite Virginia breweries, but oddly enough, I had never visited previously. I would have liked to been able to stay a while longer, and try out a few more of the offerings. I will try to find time for another visit in the near future.

Finally, to my son’s delight, we made it to our last stop for the day, South Street Brewery. All of us were quite hungry as it had been a long day since lunch at Devils Backbone. South Street’s varied menu was just the ticket. But first things first, we had to decide on a beverage. I opted to try the Tongue Dropper, an odd but enticing sounding "Sour Double IPA".  Our server warned it was more Sour Ale than IPA, but upon sipping my impression was that of a citrusy Double IPA that had a mildly tart tang at the end. I found it a worthy sipper, and a good "I've had enough" beer at the end of the day. I paired my beer with a plate of hearty Mac n' Cheese with sausage. Colleen and Checkered Flag indulged their wheat beer passion with El Jefe's Hefeweizen. 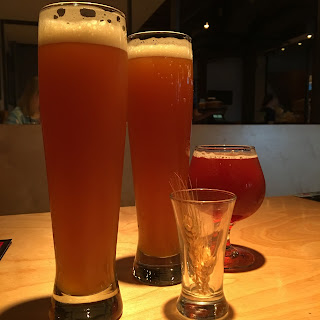 It was a long, but enjoyable day. Our previous trips along the "Brew Ridge Trail" have been in the fall, and the roads and breweries were always very crowded. This mid-summer trip was less so. We never had to wait for service, nor search for parking places. While the scenery isn't as colorful as it is in the fall, the area is still beautiful, and the food and beer well worth the drive.