After that fun match on Sunday, I was still anxious for more shooting. To my delight, on Monday I was able to get down to Winding Brook for a little trigger time.

My plan for this practice session was to work on shooting while holding a flashlight. I have been dry firing and rehearsing getting the flashlight in position under the gun at the draw. After 50 rounds of live fire, I feel more comfortable in shooting and controlling the pistol despite the addition of the flashlight in my hand.

After the flashlight work, I decided to work on something I don't practice enough — distance shooting. I don't do it often, mainly because of the time it takes to repeatedly recall the target to check the hits. I put the target at 20 yards, and tried to shoot at the pace that I might use in a match. Granted I was standing still, with no match pressure, but I was pleased with the 2, 3, or 4 shot strings. This was no dot torture drill, but I was pleased to keep them center of mass. 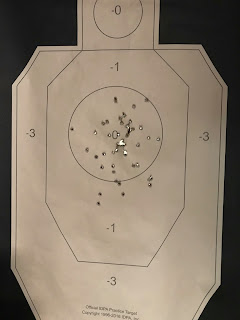 With one box of ammo left in my self-imposed allotment, I hung a fresh target at 10 yards and set the timer for a 2 second exposure. Shooting 2, or even 3 shots at each exposure from low ready, I quickly burned through the remaining rounds.

Interestingly, the other bays were mostly filled with folks shooting long guns this day. There was an AR to my left, and a shotgun to my right. I quickly was able to ignore the flash and thump from the nearby scatter gun, although I admit to an initial jump when the shooter first started firing.

All in all, not a bad way to start the week. I've got a vacation day planned later this week, so maybe more shooting will work its way into the schedule.