Forgoing my second cup of coffee Saturday morning, I made a spur of the moment decision to head out to the Winding Brook Indoor Range. Arriving just as the doors where unlocked, there was no waiting to shoot.

The range trip was not expected, so in a rare exception, I hadn't planned out specific things to practice. I started out with the target at 10, then 12 yards, just shooting "controlled pairs." Or sometimes triples or quadruples. 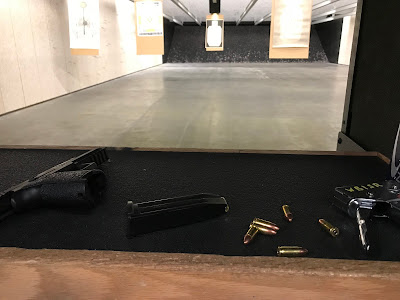 Next I moved the target to 10 yards and set up the timed turner to have the target facing me for three seconds at a time. At one point while doing these drills I went to slide lock and I immediately hit the mag release button. As the empty magazine dropped, I realized I had to grab a reload off the bench instead of my belt. At the same time I thought, "I hope that doesn't fall forward into the shooting bay." While I don't usually just drop mags at the indoor range, I do feel good that my remedial action was so automatic.

Finally, I rolled a fresh target out to 15 yards and shot another 50 rounds. As perforated center grew in the paper downrange it became evident, even to my eyes, that I was getting good hits. The accurate shooting also saved me from having to recall the target carrier to check myself. That was not disappointing at all.

What was disappointing was that I quickly ran through the ammo I had brought along. I lamented that I had grabbed only 150 rounds when I packed. That number is an ingrained default from so many quick lunch time runs to another indoor range. Rest assured I won't make that miscalculation again.

Despite the drive time being much longer than the shooting time, I was back home before noon. Colleen and I had afternoon plans to visit a local brewery to try out some new beer releases, so after a quick cup of coffee it was time to head out for more weekend fun.