On Saturday, June 23, 155 IDPA enthusiasts convened in Bristol, VA for the Virginia State IDPA Match at Kettlefoot Rod & Gun Club. The match consisted of 12 fun stages (match book) providing a variety of exciting challenges. Eleven of the stages required movement by the shooter, but even on the "non-movement" stage the shooter was shooting from a moving platform. There were numerous non-threats placed on the stages making careful aiming a requirement throughout the match, even when shooting fast was possible. Overall, the challenges and good times were worthy of a state-level match.

I didn't think there were any uninteresting stages, though some especially stood out to me. (More photos from the match are here.)

Stage 3, "Stomping" made use of an interesting "sequential target." (YouTube video here.) The three linked targets were activated by a stomp plate at the start of the stage. The timing of the targets was such that you had to shoot the first one very quickly, and then slow somewhat for the final targets. Rushing through the sequence was a common occurrence for many shooters. I was pleased shoot just three points down on that array, for -5 total on the stage.

"Drunks On Town" saw us started at a cafe table and engaging targets to our strong side, before backing up range for a couple targets from cover. The stage ended with a run back up range for a lone target behind a barrel. The opening target array include non-threats that made for some tight shots. The decisions prior to shooting revolved around where to do the reload; did one make extra risky shots on the targets in order to reload on the move, or was it best to play it safe and make a standing reload at cover, or possibly a tactical reload on the move? Like many stages in this match, there were numerous options for stage strategy. 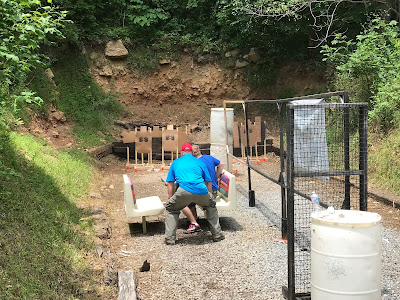 "Canoe Shootout," Stage 5, offered a unique shooting challenge, as well as a flexibility challenge. A canoe was attached to a "floating bridge" platform and we shot while seated in the canoe. Our gun and magazines were staged in boxes in front of us. A swinging threat / non-threat target pair was activated by pulling on a "fishing rod" at the start. The railings on the platform, combined with the target positioning necessitated some extreme leaning and stretching to engage the targets. Touching the railings with your body while shooting would earn a PE.

Due to priority, at least four near targets had to be engaged before shooting the swinger. As the two swinging arms slowed, the threat target ended up behind the non-threat leaving only a portion of the head area exposed. Most shooters I observed did not get to that target until it was nearly, or completely stopped. The moving platform made for quite a challenge. Typically when one is standing on a platform like this, some of the movement can be mitigated in the hips, however while seated I found the movement was nonstop and somewhat destabilizing. I found this to be an extremely fun stage to shoot, even if I did rack up a large number of points down. 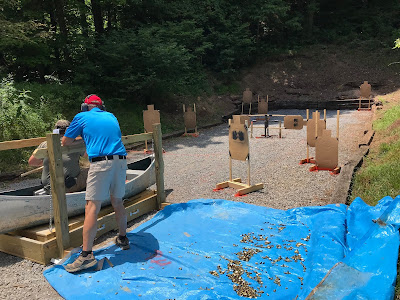 "Picnic Raiders" was a stage I enjoyed quite a bit. The unloaded gun and magazines were stowed in a small cooler, placed on the bench by a picnic table. The size and shape of the cooler generally meant that everything wasn't laid out nice and neat. The SO gave a little chuckle as I worked to figure how to arrange my supplies. The starting position was up range from the cooler. Advancing to the table, we grabbed the magazines and loaded the gun. The targets were all shot from low cover behind the picnic table.

The stage brief noted that we could not leave any magazines in the cooler, so everything we put in the cooler had to be retrieved. On stages where magazines are to be retrieved and stowed, it's a debate on how many to place out. Technically no more than two magazines would be needed, but what if there's a malfunction? In this case I staged all three magazines in the cooler. My plan was to place the first in my magazine pouch, but quickly drop the second one in my pocket since I'd most likely not need it, and loaded the gun with the third as I dropped to my knees to shoot. I finished the stage just -2. This was my last stage of the match so I ended with a smile. 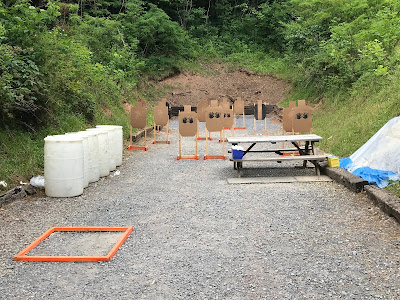 Stage 11, "Know When To Fold 'Em," was an exciting stage with the longest required movement in the match. Starting seated at a card table, beverage and card in hand, we stood to move to a close target that was engaged with six rounds. We then made a sprint across the stage to take low cover. Shooting around some barrels, there were three paper targets, a falling popper, and a swinging target. After engaging those, we shifted slightly and shot over a barrel to finish on another popper and an up-and-down target. Both of the moving targets were disappearing, with the up-and-down providing just one quick exposure.

Ammunition management was critical on this stage. I saw more than one shooter get stuck with needing a reload when the moving targets appeared, with some missing the chance to shoot the final target at all. 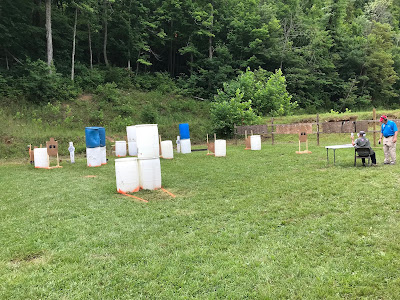 When I left the match, I had a few stage memories that disappointed, but most left me smiling. While I didn't shoot as consistently as I would have preferred, I don't have a lot of reason for complaint. Of the 154 shooters overall, I finished 45th, placing 11th of 39 in SSP and 7th of 8 in SSP EX.

In my post-match fretting analysis, I gleaned a few interesting observations. In general, I was pretty accurate on the tighter or more distant shots, with my few misses and HNTs usually coming on the "easy" shots. I also shot consistently well on all the moving and disappearing targets in the match.
This was my third sanctioned match since my match bump to EX this spring and I'm working to match the level of shooting required to place higher the classification. My goal now is to move closer to the top in this more competitive pool.

This was the first time I've attended Virginia State IDPA match. I found it it to be very well run. All of the SOs were helpful, attentive and friendly. The match flowed well. Even with a short afternoon backup at a couple stages, and a break for lunch, we shot the match in just over seven hours. Adding to the pleasure, shooters were not required to paste targets or reset steel; it was all handled by the staff. This allowed us to relax between shooting, and even socialize a bit with fellow shooters! I very much appreciated the down time to calmly reload magazines, rest and prepare for the next stage. Even the weather cooperated, providing mostly overcast skies and moderate temperatures. (Although the staff shot the day before in the rain.)

Overall, it was an extremely fun weekend that involved many activities in addition to the shooting. Traveling with regular shooting partner Stuart, we spent Friday meeting friends and visiting gun stores. The evenings found us relaxing in a remote mountain cabin, a stay which included cigars and copious Irish whiskey after the match Saturday. During the travel home we stopped for a visit and lunch with my son in the town where he's going to school. Of course, the entire weekend included numerous tasty meals, generally of the smoked meat genre. Good shooting, good people, good food and drink, it all added up to a great time.

And now to prepare for the next match...