The Virginia Citizens Defense League alerting members on the efforts of the Virginia PTA.


The Virginia Parent Teacher Association (PTA) is distributing their 2018 Legislative Priorities and it looks like Michael Bloomberg wrote it.

What is the PTA doing lobbying against our civil rights?!  That is NOT what they are supposed to be doing and we need to let them know that.

Here is item #5 on their agenda:

* Support legislation requiring and maintaining schools as gun-free zones
* Support increased penalties for possession, discharging or brandishing weapons within school buildings
* Support the right of Virginia's children to an education in an environment that is safe and non-violent
* Support universal background checks for the sale and possession of firearms and closing the gun show loophole

Gun-free zones are the PROBLEM, not the solution.  Over 90% of mass public shootings are in gun-free zones.  This policy endangers the safety in schools by giving the armed attacker the advantage.  The attacker knows that if the resource office isn't there, the attacker has total control of the school and can begin killing people immediately.  (Resource officers are not assigned to some schools and are not always present when they are assigned, as they might be in court or perhaps checking on another school.)  If the resource officer is there, then the attacker knows he will have to kill the officer first with a sneak attack and then the school is his to with as he pleases.

It is ALREADY a FELONY to have a firearm on school property that is not unloaded and stowed in a vehicle (except CHP holders can have a loaded, concealed handgun in the vehicle as long as the CHP holder stays in their vehicle).  You can't really increase the penalty beyond that unless you make it a capital crime.

Who does't want this?  But violence, including deadly violence, involves much more than just firearms, but that's really all the PTA is concerned with.

1)  If you are a member of the Virginia PTA, consider dropping your membership and be sure to tell them why you are not renewing.

2)  Contact both the president, Sarah Gross, and the Advocacy Chair, Kim Chandler, by email:

Suggested Subject: The Virginia PTA should not be lobbying against our civil rights!

I don't appreciate the Virginia PTA lobbying to restrict my civil right to own a gun and carry it for self-defense.  The Virginia PTA should be supporting our civil rights, not opposing them.  Schools being gun-free zones endanger students; it does not make them safer. Utah and New Hampshire schools are not gun-free zones and they haven't experienced the shootings that gun-free schools have in Virginia, Florida, Colorado, and other states.

Students who are too young to legally buy a gun commit most school shootings - they won’t have had a background check since the system only checks legal gun purchasers.  The older killers have either previously passed a background check or have stolen the gun. Either way, universal background checks will NOT reduce school violence.

The Virginia PTA needs to remove ALL gun-control advocacy from their legislative agenda and stay away from denying the civil rights of Virginia's gun owners.


Whenever the left trots out the "do it for the children" angle, you can be sure they are just dancing in the blood of the dead in order distract from their real agenda. Nothing the VA PTA  proposes makes children safer. These proposals ONLY affect law abiding citizens. The agenda of "gun control" is control, not safety.

Remember, school officials in Parkland, Florida chose to ignore expert advise that would actually have made students safer. In fact, the school essentially AIDED the shooter through their inaction.

I've often quipped that sending your child to public schools might be akin to child abuse. That seems to be moving ever-closer to the truth. 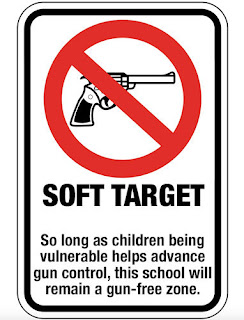