Harry's Alehouse held a Wing & Craft Beer Pairing event this week, featuring beers from Flying Dog Brewery. Having attended several previous beer dinners at Harry's, we were excited for the next adventure. We were not disappointed.

Harry's Chef James put together four tasty wing dishes to go along with four beers. This event was run a little differently than previous dinners, in that all the beers and food were served together and we enjoyed them at our own pace. A printed handout was provided that explained the choices behind the pairings. All four of the beers from Flying Dog were ones that I've had before so I was familiar with them already. I was looking forward to Chef's take on the food pairings. 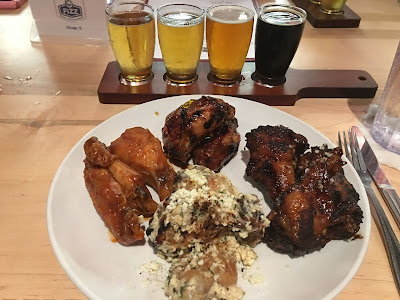 The first pairing was "Elote Wings" served with Numero Uno Summer Cerveza. The chargrilled wings were tossed in a thick chili-lime cotija cheese sauce. The toasted grain and lime zest flavors of the beer were enhanced by the matching flavors of the cheese and lime sauce coating the wings.

Next up was the popular Dead Rise OLD BAY Summer Ale served with "Bay-B-Que Wings" which were deep fried then tossed in OLD BAY BBQ sauce. The wing coating was moderately spicy with a hint of sweetness. The OLD BAY flavored beer maintained the red pepper spiciness providing a seamless flavor experience.

One of my favorite Flying Dog beers, Bloodline Blood Orange IPA was paired up with "Orange Mango Habanero Jerk Wings." Jerk-spiced and citrus-marinated grilled wings were finished with a Orange Habanero glaze. It should come as no surprise I enjoyed this combination very much. The wings were spicy with a lingering heat that was moderated but not abated by the bitter citrus hops in the beer. I was about to declare this the winning pair, until the surprise contender seen in the final offering.

Barrel Aged Gonzo Imperial Porter finished the evening served with "Smoked Salt and Coffee Crusted Wings." The Coffee-brined and Coffee-herb-rubbed baked wings had a Smoked Salt and Maple glaze. The beer by itself provided rich coffee, chocolate and bourbon notes. When paired with the roasted coffee and salt encrusted wings, the combination was amazing. Despite my preference for hoppy beer and spicy food, this combination the winner of the night in my opinion.

This was a sold out and crowded event, and the staff worked hard to get everyone served and provide water, additional beers, and plenty of napkins throughout the evening. All the diners appeared to enjoy themselves very much. It was easy to work through all the food and beer at one's own leisure. The pairings all worked quite well. The standard wings offered at Harry's Alehouse are one of my favorite dishes there, but any of this evening's offerings would make an excellent addition to the menu.

A dozen wings and the four tasters of beers, not to mention my "pre-game" pint of Center of the Universe Chameleon Orange IPA, make for a very satiating meal. Nonetheless, when one is enjoying an evening of feasting, it's tough to call it quits. We decided to cap off the evening with tasty, and cooling, milkshakes on our way home. It was a fitting cap to an enjoyable night out.