It's been cold and rainy for so long, I was actually surprised to pick up my phone Tuesday afternoon and see 70° on the display. That's too nice to be inside! I decided to leave the office a little early and get in some range time. Stopping by the house I grabbed a target, a couple boxes of ammo, and the SIG P320 Compact. 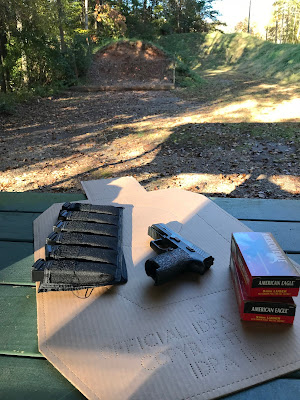 I started my time at 7 yards, drawing from the holster and going for a quick hit on target. I also kept my "resolution" to expend at least one magazine each devoted to both SHO and WHO shooting. Moving back to 15 yards I became intrigued by the bits of clay targets littering the berm. I started alternating between the cardboard target and the broken clays, with surprising success.

Loading my last 20 rounds I moved back to the 25 yards line. (I was feeling bold I guess.) Most of those shots were fired at the clay bits as well. That exercise proved that the new sights were dead on, and that, with careful aiming, even I can hit a pretty small target at distance with regularity.

I soon lamented my decision to pack just 100 rounds. But, the quick outing gave me plenty of time to get home and finish up some of the work I had foregone at the office, thereby alleviating any guilt.

I think I will throw some clays in the car for the next outing too.