Windy Day At The Range

A busy work schedule and seemingly endless days of rain made it hard to get out to the range last week. On Saturday, the wind was blowing steady but it was still a good day for a little range time. As I have the last couple outings, I was shooting the Compact SIG P320.

The range was muddy in places and had standing water in others. I found some relatively clear ground around the 10 yard mark, so did all my shooting from the same spot. Two targets were hung so I could work on some target transitions. The range rules prohibit more than two shots per string so I was limited to one shot on each target. Given the temperature, I practiced drawing from under my jacket too. On a few occasions I had to wait for the targets to return to their vertical positions after being pushed horizontal by the wind gusts. 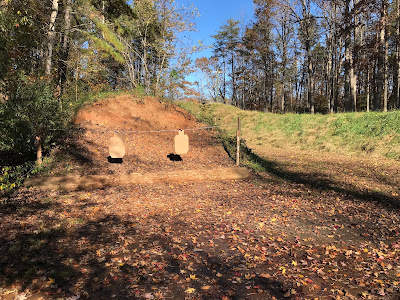 At each magazine change I alternated the direction of the transition, or switched to two quick shots on the same target. I did also devote 50 rounds to shooting SHO and WHO. Despite being a shorter gun, I think the Compact is better balanced for one-handed shooting than the Full Size version.

By the end of my 200 rounds, I noticed some degradation of my shooting and concentration, but still felt it was a great practice session. Even more, it was simply good to spend some time outside and on the range. The coming weeks looks just as full as the past few, making this range opportunity all the more welcome.