Other fun family activities have conflicted with my shooting opportunities for much of the fall. Fortunately, some of those other events still permit me to indulge in some of life's other pleasures. To that end, I covered all three of my favorite beverages at our recent college football tailgate. In addition to the different drink choices, the mild weather also allowed me to enjoy a long smoke, one that went quite well with all the selected libations.

Shortly after getting our tailgate set up for last weekend's college football game, I lit a Rocky Patel Vintage 2006 San Andres. It was still "before noon" so I sipped a milky latte purchased from a ubiquitous chain. Typically my coffee is fresh-brewed and enjoyed black, but the creamy, vanilla-flavored drink presented a nice pairing, even if the actual coffee content was minimal.

Coffee completed, I moved on to one of my favorite sipping whiskies, Bulleit Bourbon. Obviously no complaints with this pairing, which served to alleviate the remaining morning chill. 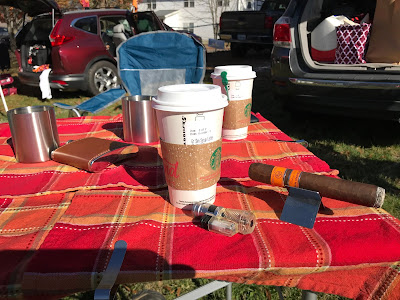 A short while later, I still had plenty of cigar left and lots of time before the game. Not shown in the picture, the afternoon's choice of beer was Devils Backbone Cold Room Violation. This Imperial Red Ale was brewed in collaboration with Sibling Revelry Brewing. The slightly sweet caramel and mild bitter citrus flavors presented no conflict with the rich smoke.

This Saturday football outing unfortunately conflicted with the Rivanna IDPA Top Ten Match. After several years of shooting at the club, I was excited to have finally made the Top 10 cut. These pre-game indulgences helped to alleviate the disappointment of missing the match. Even though our team isn't doing well this year, spending a moderately warm November Saturday afternoon sipping and smoking is a pleasurable consolation.