My long-awaited return to shooting an IDPA match arrived last weekend when I was able to shoot the monthly match at Sanner's Lake. I had been almost two months since my heart attack and I was nervously awaiting the event. I was worried I'd be delayed even longer when I went back in the hospital last weekend to have another stent put in. But upon my discharge the cardiologist stated, "Do your normal activities as much as you can." Okay. Game on!

I have been walking regularly, but I was still under restrictions on lifting. I was confident from a health perspective, but was still feeling some angst and nervousness. It was a cold Saturday morning when I met my two travel companions and we headed to the range in Maryland. I wasn't sure if I was shaking more from the cold or from the nerves

This month, the organizers did something a little different. Instead of the typical 6 stages in 6 bays, the match consisted of 12 short stages requiring 5-12 rounds each, and shot at distances of 3-10 yards. Two stages were set in each bay. At least I wouldn't have to worry about a lot of running.

As I approached my first stage, my heart was racing and I was feeling atypically tense. The stage was simple; gun and reloads on the table, all loaded with 6 rounds. The requirement was two shots on each of three targets, reload, then two shots on each of the targets support hand only. I was reminded of my early days of shooting — flinging bullets downrange with abandon. Sights? What sights? I actually did better with my support hand as I was forced to slow down a bit. 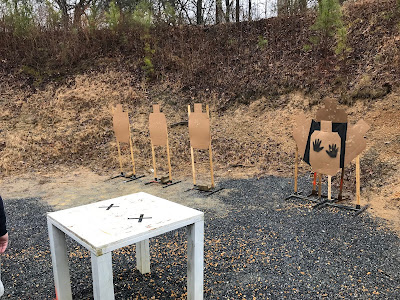 That first stage over, I went back to my chair to think happy thoughts and force myself to relax. The rest of the match went better, though my two month break certainly showed both in shooting and stamina.

The stage with the most movement had us running downrange to engage targets as they appeared behind barrels, finishing with three low targets behind a wall of barrels. This was the fourth stage we shot and I was at last feeling a bit more relaxed.

Another stage required three hits on a close target before moving along a wall to shoot a steel popper and a target that intermittently appeared from behind a non-threat. Instead of the the falling steel activating the mover, shooter stepped on a pad, either on the way to the popper or by taking a step back to activate. Most folks opted to shoot the popper first, then reach back with a leg to activate the quickly appearing and disappearing target. I enjoyed the stage quite a bit despite putting a very nice 2-shot group on the non-threat in my rush to hit the disappearing target. That 10 second penalty did me no favors in the standings.

We started another fun stage by holding down a swinging non-threat that would move in front of three targets placed at increasing distances down range. Releasing the fast moving swinger, you stepped back and put four shots on each target. This turned out to be my best stage of the match.

Four of the stages in the match were set up as the four strings of the IDPA 5x5 Classifier. I was happy to see that included as I can check the box on having current classifications in all the divisions I might shoot in the next year. 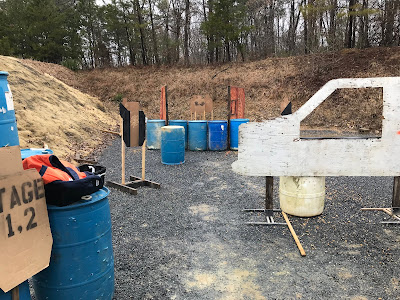 I generally prefer longer stages with more movement, to the shorter, standards types stages. Nonetheless, I enjoyed the match very much. The format worked for this point in my return to normalcy. My friends were most generous in pulling the gear wagon and filling in for my pasting duties. I was able to sit when not shooting. They also offered support in a way only good friends can; including remarks about toe tags and splitting up my gear in the event of an incident. And really, I wouldn't want it any other way.  :-)

It was a small step, but one in the right direction. After a heart attack and two hospital stays, and only one limited range trip this year, I really can't complain. There's still some healing and recovery on the road ahead but I'm very excited to be on the way back to the usual fun activities. It's a few weeks until the next match, so I have time to brush up with dry fire and maybe even a range trip or two.