Shooting With My Son and a New Gun

Our son was home last week for his Spring Break. His extended visits home are always fun, especially since we usually hit the range together a time or two. This visit was made more exciting since only a few hours before he arrived I had finally picked up that SIG P365 I've been eyeing. And, now that the DST time switch has occurred, the range is actually open late afternoon and early evening, allowing more time to shoot. 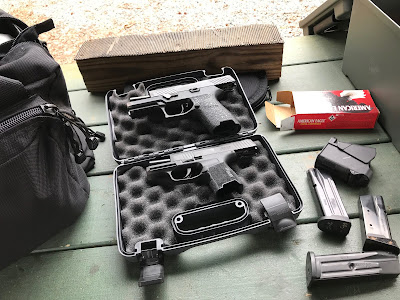 I brought along my SIG P320 Compact, the new P365, and he had his P226. Copious amounts of ammo and targets completed were brought along. Upon arriving we noticed the bay had a new layer of gravel. We've endured a few years of bare dirt (mud) so that was a nice surprise.

I started out shooting a couple of mags through the P365 from 7 yards. After that we did all our shooting from the 10 yard line. I was generally pleased with how I shot the little gun. It's pretty easy to control, despite the small size and a bit of kick. The aggressive stippling on the grip helps, but also leads to sore hands after a while. I used both 115 and 124 grain ball ammo, as well as some Speer Gold Dot Self Defense rounds. There were no issues with any of it. I'll try to get several hundred more rounds through the gun before t-shirt season when it will be added to my carry rotation.

We alternated between all three guns. I soon realized that I should bring out the SA/DA gun a little more often.

Due to range restrictions, we did spend more time standing idle than actually shooting. The latest rules at the club forbid more than one person firing at a time, even though everyone stands on the same line. If you find yourself pulling the trigger at the same time as another person, all shooters must sort out a plan to avoid that offense. More than one person shooting is seemingly too difficult for the range officers to distinguish from a single shooter doing "rapid fire." Strings of fire are limited to two trigger pulls. This leads to a lot of "You shoot two rounds, then I'll shoot two, then you..." Shooters are also forbidden from even loading up magazines when another is shooting, using up even more precious time. On the bright side it allowed more conversation during the breaks together to load magazines.

Despite the restrictive rules, the outing was a lot of fun, and provided enjoyable father-son time. It was good to continue working out the "bugs" from my down time. Given his busy work load in school, my son had not been shooting in several months and appreciated the tune up time as well. 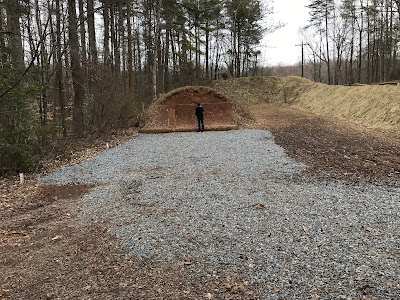 It's good to have a target repair minion.