A Sunny Day For IDPA

The Saturday morning sky was blue and bright as I drove to the monthly IDPA match at the Cavalier Rifle and Pistol Club. A light jacket was required while we waited for shooting to begin, but the air quickly warmed, despite an intermittent strong breeze. By the end of the day I would have sunburn on the back of my neck and legs. I guess it's time to dig out the sun screen.

Stage 1 had us starting with just six rounds in the gun, and facing a row of three close targets. Each target in this stage required a minimum of three hits. After shooting the first two targets, we reloaded and engaged the third before turning to move through the rest of the course. Since I was shooting CCP, with just 8 rounds loaded I had a decision to make at that point. In order to avoid a standing reload later, I opted to shoot 4 rounds on targets three and four, to set up for reloading on the move. SSP capacity shooters had a different strategy.

The next stage had a classic "seated at a table" start, with a twist. The unload gun was placed on the table, spare mags on the belt, and the third, starting magazine was "on the shooter's body." Some folks stuffed the mag in their waistband, others in a pocket. The first three targets were engaged in the open, either seated or standing. The shooter also had the choice of which side of the table they ran to, depending on which direction they were going to shoot the stage. There was also an array of three targets, that were engaged from either end of a wall, or depending on the shooter's confidence, from just one side of the wall. There were plenty of choices on strategy here. For some, there was also the decision to do a tactical reload while moving down their chosen path. 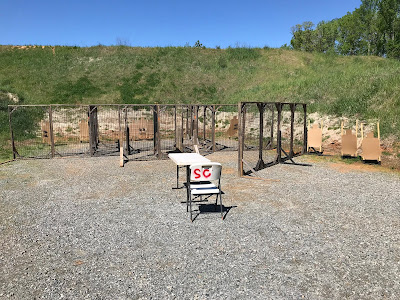 The third stage was the "standards" stage, shot in two, three target strings. A symmetrical course of fire was set up with a pair of open, partial targets to the left and right of the starting position, and a third target pair behind wall. For the first string, the gun was held in the right hand, at a 45 degree angle. The right two targets were engaged, then we moved to shoot the third around the right side of the wall. The second string was the same, but was shot left-handed using the left side targets. I had no misses, but I definitely need more practice shooting one-handed.

Stage 4 started us with hands on a wall, then turning to engage to open targets while on the move up range towards a wall set across the bay. The first shooting position center on the wall was through a narrow opening where we saw a couple of distant targets with non-threats menacingly placed midway to the targets. The final position had us shooting a couple more targets, again with dangerously located non-threats. The middle array of targets were also open to make up shots form the last position. 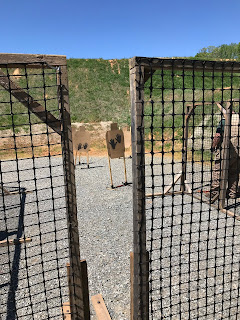 Walking through the stage I kept thinking, "Those are really tight shots." Heck, even if I planned to take the makeup shots at the end, there was still a good chance of hitting a non-threat. Interestingly, as I shot the course, those narrow gaps seemed less foreboding than they did during the walk through. At the end, I shot the stage clean.

The last two stages were quick ones, set up in the same bay. Stage 5 had two very close targets separated by a non-threat, each requiring two body and one head shot. This is one of those stages that can lure you into shooting too fast. I recently experienced that on a similar stage at the Virginia Indoor Regional. At that match I ended up pulling the trigger too fast and had a -1 hit on one of the body shots. This time I kept telling myself to slow down and shoot no faster than I could see the sights. Funny thing is, when it was all said and done I found I had shot really fast, but I recall seeing the sights on every single shot. My time of 3.26 seconds, and zero points down, ended up being a fifth overall stage finish. 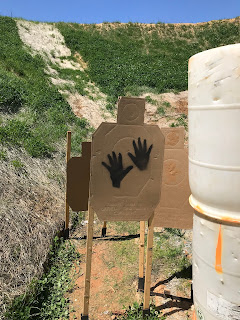 Stage 6 began with just a single round loaded in the gun, the gun in hand at low ready. The initial target had only the head available and required one shot. Reloading after that initial shot, the stage finished with an array of three targets set up behind wall and fronted by two non-threats. That array offered options of shooting either from the left side or right side of the wall, or using both sides, depending on the shooter's comfort level. The non-threats all but forced head shots on two of the targets, at least from my perspective, when shooting around the right end of the wall.

This was just my fourth match this year. It was though, the first one at which I've felt truly comfortable and relaxed. I managed to just squeak in to the top half overall, finishing 19th of 40 shooters. The simple highlight for me was that I had no misses and hit no non-threats for the entire match. As I continue to recover from my "event," each outing is just a bit better than the last. I am not up to my previous performance level but it was certainly a most enjoyable morning spent shooting and visiting with friends. I can't wait for the next time.