Simple Fun at the Range

When it's a busy week at work, few things beat a trip to the range to unwind. My first attempt in the week was interrupted by, well, work. (So I settled for a relaxing cigar break on the deck.) On Thursday my purposefully cleared calendar actually stayed clear, allowing time to shoot.

Since I've been shooting the Compact P320 a lot recently, for this outing I packed both the Compact and Full Size versions of the SIG P320. I had intended to split the ammo between the two guns, but in the end I stuck with the larger gun for most of my time. 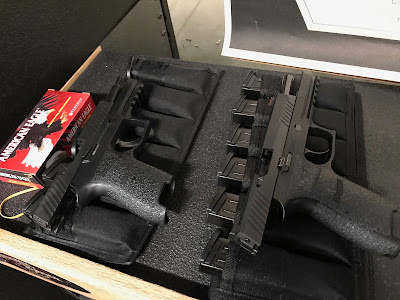 For the first 100 rounds I shot at distances from 10 to 20 yards, pushing the target back every ten shots. I then set the target closer, at 7 yards, and activated the intermitted target exposure for 3 seconds each time. From low ready, I fired 2 - 3 shots each time. Often when using the turning target I end up just getting off the shots quickly. This time I concentrated on seeing the sights settle on target — a unique concept I know.

Finally I did some shooting with the Compact P320, working out to 20 yards. After I packed up my gear and started to leave the bay, I realized I had forgotten to retrieve the target carrier which was still sitting at 20 yards. I turned around and the RO said he'd get it, but I told him "I can't see it from here, so I should check the hits." I had felt I shot well, and indeed most of the holes where in the -0 zone.

This wasn't intended as a hard core "practice" session, but simply a diversion from a busy and slightly stressful work week. And you know what? It worked.