On Saturday morning, Colleen asked, "Do you want to go to the indoor range this morning?" At first I wasn't sure I felt like making the drive. However, it's been several months since we used our membership, AND I did really want to shoot. The decision was made and we embarked on the one hour drive down to the Winding Brook Range. We arrived in the midst of the Saturday morning rush so we would have had to wait for two adjoining lanes, instead we opted to share a lane.

I first brought out the SIG P365 for a little more time with it. Colleen also shot a couple magazines through the gun. She then shot her S&W Shield while I loaded my P320 magazines. As I watched her shoot I thought, she sure doesn't lose any accuracy after extended absences from shooting.

When it was my turn again, I shot about 100 rounds at 7, 10, and 12 yards, while holding a flashlight. I figured I should get just a little practice before next week's indoor match. Even though drawing from the holster is not permitted, I practiced hitting the switch and bringing the flashlight to the gun as I got it on target. I also wanted to fire multiple round strings to test my grip, since I'm limited to only two shots at the local outdoor range. 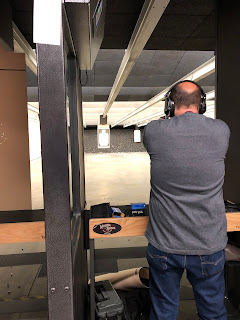 For the final 50 rounds, I progressed through 10, 12, 15, and 20 yards, shooting 10 rounds at the first three target stops, then 20 rounds at the furthest distance. Though it can be frustrating, this is one of my favorite drills to test sight alignment and trigger control. It also enforces a bit of patience on my part as I have to bring the target in every few shots to confirm my hits at 20 yards.

I realized as we drove home that this was the most relaxed I've felt shooting in some time. Lately my time has either been under match pressure or at the local "conservation organization" ranges. I've realized that I am often somewhat on edge at the local range due to past range officer behavior and the occasional presence of unsupervised, careless strangers. This trip to the range was most therapeutic and I was very thankful that my wise wife suggested it as part of my healing. Hopefully future visits will be more frequent.

We treated ourselves to a couple of fresh baked treats from a local cookie shop for the ride home. The stress free shooting, tasty cookies, and the wonderful company made for a most delightful outing.