With temperatures in the upper 70's last weekend, sitting inside was out of the question. Sunday afternoon started with washing the car in the driveway, just like in the summer. Then Colleen and I did a short hike through the woods of a local National Battlefield park. Shorts and t-shirts were the order of the day, and I even worked up a sweat. Later in the day it was finally time to settle in for some proper relaxation on the deck.

After grabbing a couple of cold ciders from the fridge, I selected a CAO Brazilia Box Pressed while we watched the sun slowly sink. The Brazilia is one of CAO's most popular lines if social media is to be believed. I've enjoyed it many times, but this was my first time smoking the box pressed version.

The wrapper leaf is Brazilian Arapiraca, with a dark chocolate shiny appearance. The binder and filler leaves are Nicaraguan. The Brazilia is a full-bodied smoke, but it's not harsh at all. The flavor profile has a creamy aspect to it. I get hints of cocoa and coffee, with a sweet nuttiness and mild spice in there as well. 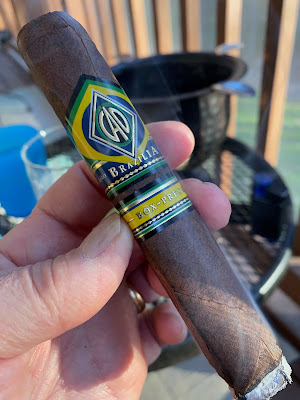 The box pressed nature of this cigar is stunning. This one in particular features the most extreme corners I think I've encountered. One side and corner were especially sharp. I suspect this stick may have been on the bottom corner of the box.
The draw on the stick was loose and somewhat airy. Not unexpectedly, the burn needed regular maintenance to keep straight. I am somewhat compulsive when it comes to touching up even a mildly irregular burn line, so this one did have me reaching for the lighter frequently. That didn't detract from the enjoyment though. And the smoke output was prolific. Even at rest the cigar put off copious smoke. We have a couple tower fans on the screened porch, both for air circulation, and to create an "air curtain" to help block the smoke from drifting into others who may not want to be sitting in it. Colleen, who's not often bothered by wafts of cigar smoke, fired up a second fan on high speed to help clear the air. 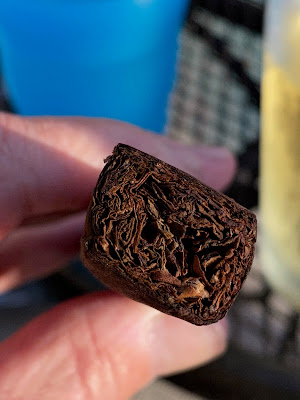 After an hour or so of enjoying our cold beverages and some salty snacks, the cigar was finished. For me it was an exceptional end to a bonus November weekend of warm weather. I don't think we'll get many more of those this year.