Saturday by the Fire

It's was a relaxing weekend in general. After spending a little time Saturday morning clearing some underbrush and fallen trees, we decided to spend the better part of the day relaxing around the fire pit. After getting the fire started, and pouring a couple beers for Colleen and I, the first cigar I lit was the Micallef A.
The Micallef A was first introduced last spring as the "To Be Named Maduro." The preview of the cigar gave members of the Micallef Ambassador program the opportunity to try the cigar and suggest a name for the final release. The final naming as simply 'A' is to honor the Micallef Ambassadors.
Micallef A features a Nicaraguan Maduro wrapper, an Ecuadorian Sumatra binder, and fillers from Nicaragua and the Dominican Republic. The 6¾ x 54 Churchill is the only vitola offered. When I smoked the preview stick, there were frequent burn touchups required to maintain an even burn line. The experience this time still required touchups, though they were less frequent. However, the wrapper peeled away from the cut end in several chunks, leaving only binder exposed for the last one inch of the stick that I held in my mouth. 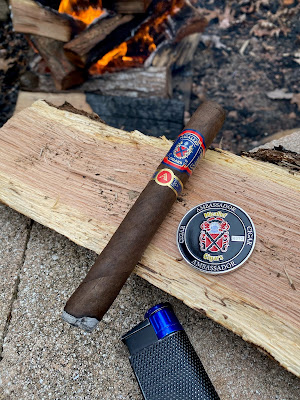 Despite the construction issues, the flavor of the stick was quite enjoyable. A rich coffee and chocolate "mocha" profile dominated. There was a bit of pepper spice that built towards the finish. I paired a Lagunitas IPA with the Micallef A, and the stick lasted well into my second pint.
With the fire burning strong, and the sun starting to slip behind the trees, I returned to the humidor for a Fratello DMV Delaware (2019.) The cigars of the 2019 release of the DMV series all have an Ecuadorian binder with Dominican and Nicaraguan fillers. Different wrapper leaves gives the variation between the four cigars in the annual release. The Delaware sports a Brazilian Arapiraca wrapper. 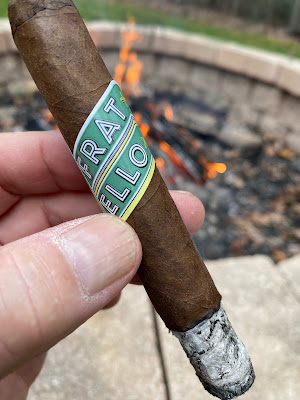 The 5 x 47 stick burned well and held a long ash. The flavor profile was full bodied with dark chocolate and espresso backed by cedar and pepper. I also detected a bit of leather and wood coming through. I have enjoyed all of the Fratello DMV variations I have tried, and this was no exception.
It was eventually time to stop feeding the fire and head inside for a late dinner. I hated to walk away from the smoky pleasures, but tomorrow was another day holding the expectation of more cigars before the weekend wound down.
Mused by David