In a schedule almost reminiscent of the "old days," I squeezed in IDPA matches on two consecutive weekends in July. After the Rivanna match the prior weekend, last weekend I made it to the monthly match at Cavalier Rifle and Pistol. It was an overcast morning, and we saw a brief rain shower early in the day, but the sun eventually shone and warmed things up.
Our first stage of the morning saw us starting in a corner formed by two walls. Moving through the course fire, we engaged targets from several shooting positions. 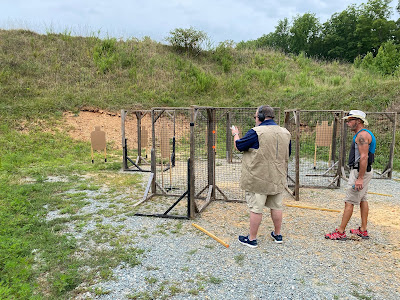 The next stage involved not one, but two movers, but contained a total of only three targets. The start position was standing behind a low barrier with our gun holstered. Using our strong hand, we were required to knock a tool bag off the wall, which activated the movers. The first target was an up and down mover, which meant we had to draw and put a minimum of two hits on it before it vanished. After that, we were left with a stationary partial target, and a swinger. It was a quick but interesting course of fire. 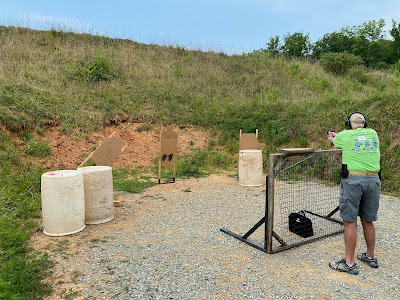 Our third stage, like the first, involved a maze of walls and targets. The design of the course offered options for the shooters, and fortunately for me, I was able to match my stage plan to the limited round count of the  Compact Carry Pistol division. 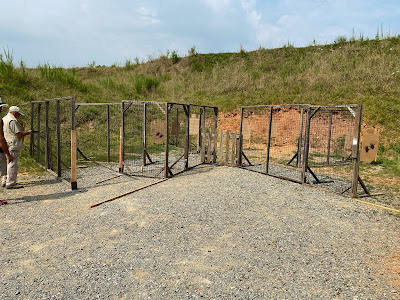 Approaching the fourth stage, I saw barrels. Just barrels, plus a lone open target at the end. However, walking along the row of barrels, five more hidden targets came into view. Per the stage briefing, when the open target was engaged depended on where one moved or was standing. It was a tad confusing, and perhaps not aligned with a strict interpretation of the rulebook, but was surely a fun stage to shoot. 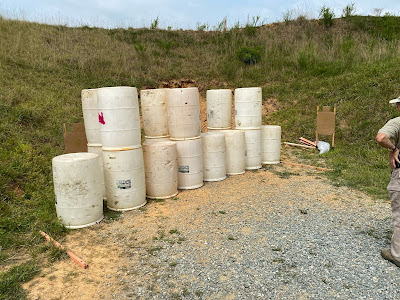 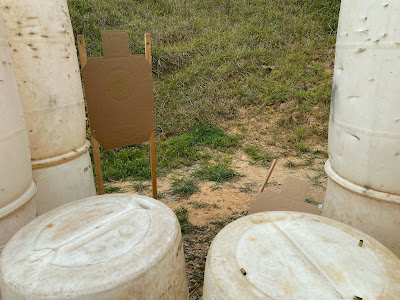 The last stage our squad shot had us starting with our magazines on a table, and the unloaded gun set on a shelf below the table top. I enjoy the "out of ordinary" starting positions. It breaks the autopilot mode and causes one to think just a little. After loading and retrieving the needed mags, you went on to engage various targets among the walls. 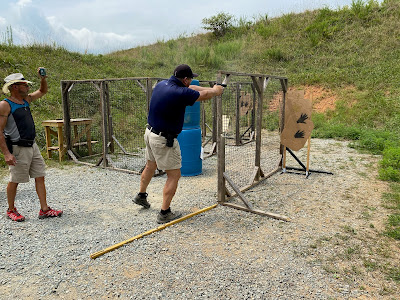 I shot several good stages, and a couple less so. I finished in the middle of the pack overall, at 24 of 51. However, I was the only person opting to shoot in CCP, so I was first in the division. (Take 'em where you get 'em.) 😁 I do find it interesting that when the Compact Carry Division was announced a few years back, it was quite popular. These days, less so. I still enjoy it though.
I thought the stages were more reminiscent of USPA-lite than what is typically seen at IDPA matches. They were all fun to shoot though. And as always, chatting with friends and fellow shooting enthusiasts are always highlight of the match.
Mused by David